Why personality tests are a hoax, as explained by an "INTJ" 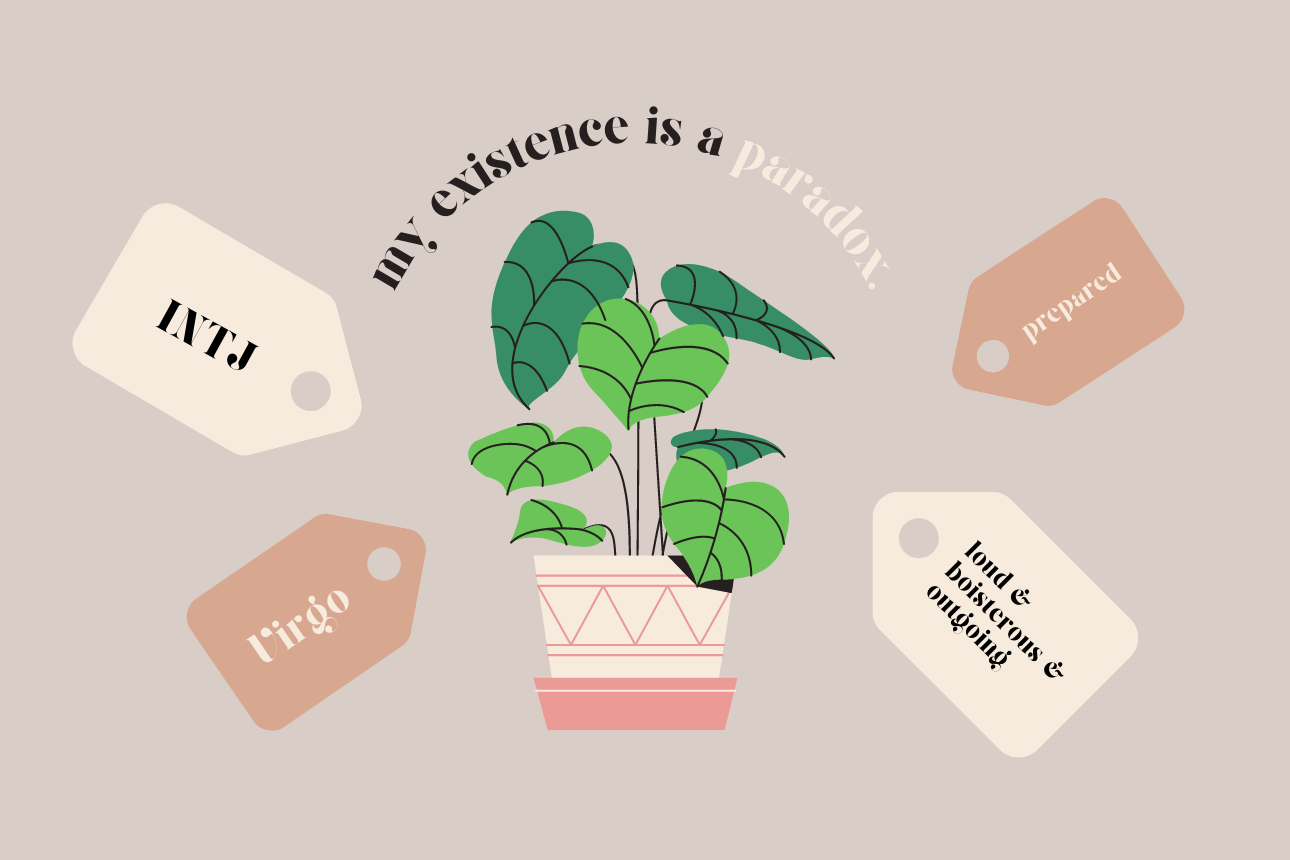 A green monstera plant with "My existence is a paradox" stretching above it. The plant is also surrounded by other labels on tags such as "Virgo," "INTJ," "Prepared," and "loud & boisterous & outgoing." Edit created by the author.

Every Monday at 2:10 pm, fresh out of school and screen fatigue, I found myself at the head of a metaphorical table. On Zoom.

This was a meeting for Wolfpack Volunteers, one of my school’s largest (and finest) community service organizations. Last I checked, our email list boasted nearly 300 members — and yes, I have to say nearly because we have so many people it’s hard to remember the exact number. I happened to be its president. (Okay, I didn’t just happen to become its president — there was a lengthy application and interview process and I was also their public relations for at least two or three years prior, but you get the gist. I was the leader.)

Generally, we started off the meeting with check-in questions. They could be anything as tame as, “if you could be a plant, what plant would you be?” to stuff as crazy as, “What’s your survival strategy in a zombie apocalypse?” (To the latter, one of my officers helpfully said, “Make peace with my lot in life and die.”) It all depended on how much imagination my team brought to the table that day.

Today’s question was “What is your personality type and do you feel like it represents you well?” It was obviously a reference to the Myers-Briggs Type Indicator. Also known as the MBTI, this lengthy test spat out a four-letter acronym that supposedly defined the personality of every person who was coerced into taking it by their peers. The last three letters of the results — sensing/intuition, thinking/feeling, judging/perceiving — were usually waved aside in favor of acknowledging the more universal first label: introversion or extroversion.

I had my four-letter acronym memorized: INTJ. I was intuitive, thoughtful, and very judgy according to those last three letters. The “I,” however, was a different story entirely. Introverts are, by definition, people who feel the most at home in their own thoughts. That, at least, was true for me.

Lately though, people had been using the word “introvert” as synonymous with “shy.” Which wasn’t me at all. Hello. I was sitting on a Zoom call and steering this metaphorical ship of nearly 300 crewmates. I needed to be loud and sociable by default. It was basically in my job description.

Obviously, there were two facts that I could take away from this test. One, that my very existence, according to this four-letter acronym, was a paradox. Two: It was a hoax. This whole thing was a hoax.

I noted this word choice as I answered. Not, what’s your personality type? But what are you? Who are you? “I’m an INTJ.”

Immediately, 10 pairs of eyes widened. I was ready for the chorus of “You don’t seem like an introvert at all!” and “How can you be a leader if you’re supposed to be shy?”

I hadn’t planned to recite my dissertation on how the stereotypes of introversion and extroversion could be applied to many other aspects in life such as gender, race, sexuality, and so on, but since they’d asked .…

I believe society attempts to make everything easier by clinically categorizing, kind of like computer software. Except it’s actually just humans doing it, because we’re lazy and it’s easier to just clump people together than to truly get to know every single one of them. Sure, it might be the simpler way to classify who you are in the vast and ever-changing world we live in. But how much of you — the parts that like watching Survivor and reading romance novels late at night, the bits that are 110% a part of what makes you inherently you — how much of that do we miss in brushing over your unique story with a single stroke?

You can’t blame your astrological sign for how you react badly to something that goes your way, because then it invalidates every one of your other experiences that makes you who you are today.

You can’t say that you aren’t able to do this or that because of your gender or your age or where you come from, because impossible shouldn’t be in your vocabulary.

Can’t you see how limiting it is? How these labels, which we all clung onto like lifelines, choke and smother the richness out of who we really are?

Whether you’re an ESFP or an INTJ or any other of the 14 personality types that the Meyer Brigg’s type indicator claims you are, I don’t think it’s necessary to place yourself in the confines of those stereotypes. Just because you’ve been labeled as an extrovert doesn’t mean that you have to be louder or more outgoing. Similarly, just because you’ve been labeled as an introvert doesn’t mean you have to be demure or quiet. These aren’t even the true definitions of extroversion or introversion.

You don’t need to plant yourself into the pot that society intends for you. Smash it into smithereens. Watch as the cracked clay flies across the pavement. Pick up the tattered remains of your label (if any of it is still legible) and crumple it in your fist. How were you ever meant to grow when the soil you were given never left any room for change?

Ten pairs of eyes stared back at me blankly.

I coughed into my fist.

“Of course you have an entire speech prepared for this exact occasion,” one of my officers finally said.

Another piped in. “It’s very Virgo of you.”

I was going to lose my mind.