What lies in the future of the Supreme Court? 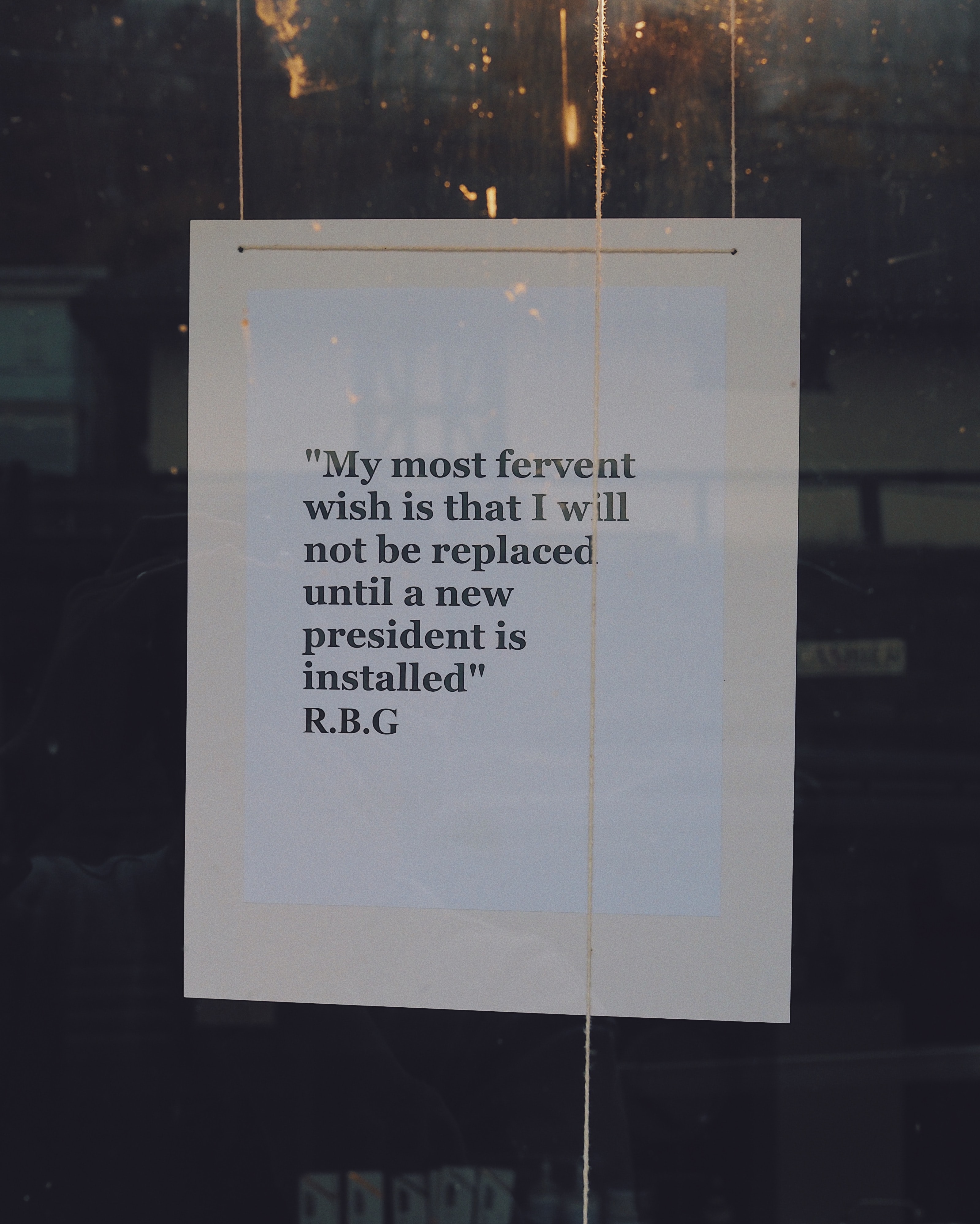 Photo of a sign haging in a window that says, "'My most fervent wish is that I will not be replaced until a new president is installed.' R.B.G." Image courtesy of Greg Schmigel via Unsplash.

Ruth Bader Ginsburg, former associate justice of the Supreme Court of the United States since 1993, died on September 18 due to complications from metastatic pancreatic cancer.

Why is this such an important topic? Justice Barrett is known to have very conservative views on topics such as abortion, the LGBTQ+ community, and healthcare. The question on everyone’s mind is how will this 6-3 majority impact these landmark issues.

Roe v. Wade was decided on January 22, 1973, and required all states to allow abortions. Before this, some states had laws making abortions illegal unless the mother was endangered. If Roe v. Wade was overturned, allowing states to make abortion illegal again, people who don't have access to birth control or Planned Parenthood would be the most affected, along with teenagers and low-income families. These groups of people would be most affected because without having access to birth control or Planned Parenthood and other abortion providers for unwanted and unmanageable pregnancies these groups of people may look to Illegal and unsafe abortions. Unsafe abortions remain one of the five leading causes of maternal mortality, even though it is mostly preventable. More than 22,000 women and girls die each year after having an unsafe abortion, according to a comprehensive report published by the Guttmacher Institute in 2018. ‍

Maria O’Malley: Do you think the appointment of ACB will affect Roe V. Wade?

Andrew Bolen: I don’t think Roe v. Wade will be overturned, however, now that the courts are 6-3 there will most definitely be talk about it.‍

After same-sex marriage was made legal at the federal level in 2015, the LGBTQ+ community has been met with many challenges that heterosexual couples would most likely never have to face. Some of these legal challenges include the possibility of legal same-sex marriages being voided,  questions on the rights that accompany civil unions, access to retirement and pensions of spouses, co-ownership of private properties, filing joint taxes, and spousal support following separations and divorces. No doubt with a more conservative court, more of these questions will be coming up in future cases.‍

Low-income families, the uninsured, and immigrant families will be the most affected by losing the Affordable Care Act if it is repealed. People going without health care would lead to the increased spread of the flu and COVID-19 and an increased death rate among the lower-income population.‍

Do you think the appointment of ACB will affect the Affordable Care Act, also known as Obamacare?‍

Most likely not because the chief justice who is on the conservative side of the court has already ruled in favor of the ACA. So even if Amy Coney Barrett voted against it her vote wouldn’t invalidate the entire act.‍

Options available to neutralize the 6-3 majority‍

Since the Supreme Court does not have a set amount of judges, there isn’t a law that says we can’t have more judges. For example, our first president George Washington  appointed 12 Supreme Court justices. More justices could bring stronger legislation from Congress and executive orders to protect the rights of the most vulnerable citizens. ‍

Do you think the number of Supreme Court justices will be expanded?‍

I believe they won’t — both Nancy Pelosi and Joe Biden are very moderate Democrats. But if in two years the progressive wing takes over the Democratic Party and has the majority in the House, then I can see the number of judges expanding.

At the end of the day, Amy Coney Barrett single-handedly will not have a huge impact on the courts. We’ll see in the future how well she does, and maybe she will be in a court that’s not just nine justices but 11 or 12.