What I've been up to this summer 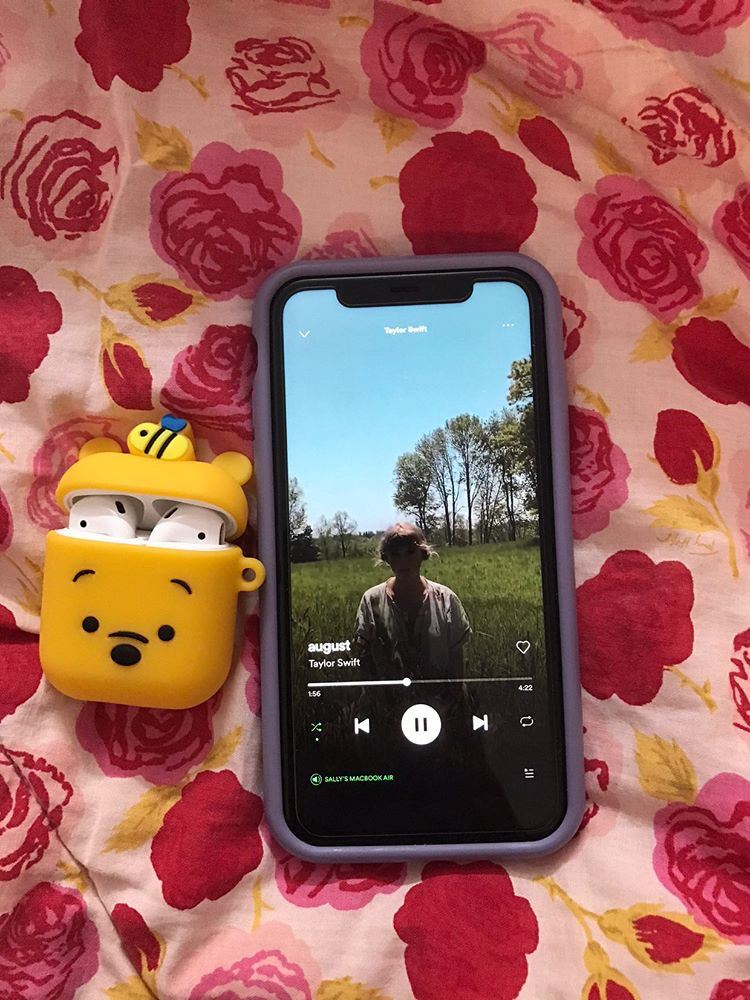 AirPods in a Winnie the Pooh case next to an iPhone playing "August" by Taylor Swift. Photo courtesy of Sally Phan.

A few days ago I started this Korean drama on Netflix called “It’s Okay to Not Be Okay.” For the past few weeks, I kept watching its preview. One or two episodes would come out a week so I wanted to wait until most of the episodes came out to begin watching so that I could binge it. It looked really beautiful and I heard so many good things about it so when I started watching, I was super excited going into the first episode.

Here’s my take on it. So far, I’m on the 10th episode (there are 16 in total) and so far it’s extremely captivating. It’s far from boring which is always good. Every episode something new happens and every single scene is so beautiful. However, I’m more than halfway through and I still can’t seem to like the main romance in the film. The drama is about a children’s book writer who meets with a caregiver at a psychiatric hospital. It sounds interesting, two completely different people cross paths. I can’t seem to locate any theme around the drama other than what is already given in the description, that she teaches him to live a little more in life and he teaches her that not everyone is going to leave. There’s so much to the drama where every episode offers something and there’s always a twist, but the relationship is so unlikeable (at least it is for me). I don’t want to go too much into it because I don’t want to spoil anything, but when they say opposite attract, this is not a good example of it. I think others can have a different perspective and really like the romance portrayed, but I don’t, maybe not yet. The overall drama is not bad, I actually really like it and I’m looking forward to finishing it, but my mind keeps going back and forth on whether or not I like where the couple is heading.

I also think maybe I’m feeling this because I had my expectations too high. I came into this thinking that it was going to be my new favorite Korean drama and nothing else would compare in the future. I kept watching the preview and got so excited so the moment I found something I disliked, it felt disappointing. My actual favorite Korean drama, "Crash Landing on You," really impressed me because of how much I ended up liking it when I started watching it, thinking it would be a typical cliché. I will finish "It’s Okay to Not Be Okay" soon and hopefully I’ll have a different outlook on it.

Recently I have been trying to find new music to listen to. Taylor Swift just released her newest album, "Folklore," a few weeks ago. I don’t really listen to Taylor Swift but I wanted to listen to the album because I heard so many good things about it. I really like the song “August,” it's the eighth track on the album. I wonder if she did that on purpose because August is the eighth month of the year. “August” reminds me of this book I read last month, “We Were Liars” by E. Lockhart. Both “August” and “We Were Liars” have this sad summer romance vibe that I really like. I think when I first listened to it I really related it to “We Were Liars,” which is about a summer mystery regarding these teens who go to their family’s island during the summer. “August” reminds me of the beach too. The first words in the song are “salt air,” which automatically makes me think of the salt water on the beach.

I don’t really associate summer with sadness or romance but both song and book just portray that mood onto me. From listening to the song too many times, it sounds like it was about a summer romance that leaves her feeling hopeful at first but sad in the end. It has me thinking about the seasons. Summer is a warm month but then for the rest of the year, it only gets colder with fall and winter. So maybe “August” is supposed to represent the end of summer vacation and while that was fun in the moment, after that it is just cold. One of the lyrics is: “But I can see us lost in a memory, August slipped away into a moment in time, ‘cause it was never mine.” This makes me think about how time can go by so quickly and at some point things only last as memories. People move on and things change so in the end, sometimes the only way we remember people or time is through a memory. I think there could be many different stories that can come from “August” and the whole album too, which is one reason why I think it is so popular.

Lately I have been thinking about my childhood. Yesterday, I saw a TikTok about how when you go off to college it’s basically like saying goodbye to your childhood. Maybe that’s true, but I certainly don’t want it to feel that way. I always think that college is forever away and that I don’t have to worry about it now, but in reality, I’m going into my senior year and I’ll be applying to colleges in the next few months. I don’t want to think about college as a way of saying goodbye to childhood. I think it would be a fun, new experience. I think it’s exciting too because of all the new opportunities and having a chance to really be independent. Whenever I think of college, I really only think about what schools I’m going to apply to or where I think I’ll get in. But I never really thought about the differences in college compared to high school realistically. In high school even though it’s stressful, I guess in many ways it’s a lot more chilled and calm. I don’t have to worry about paying for tuition, if I’m getting enough credits during the semester, or other things like housing and meal plans. It is true that college is a big thing?

I’ve never been away from my family before so I can’t imagine having to do that for the first time and having it last four years. In the end of it all, everyone grows up. It’s a scary thing to think about. Is college really a goodbye to childhood? It’s not like you’ll have a childhood again after college. At that point it’s basically adulting. But is it a weird thing to still like things from your childhood even when you’re grown up? I don’t think it is. Of course as I grow older there are things I just have to do and things I have to worry about that I wouldn’t have back when I was a kid but I don’t think that means I have to erase everything from my childhood out of my life. Childhood is such a loose thing because everyone has a different experience. But when I think of childhood, I’m thinking about my family, little toys like stuffed animals, coloring books, and other things of that sort. I don’t necessarily think all those things will go away. Maybe going to college and growing up just means that things get added on and they might push childhood things to the back.

I can’t stand not having things planned out.

I’m someone who’s forgetful, so if I don’t have a reminder set or a to-do list ready, I’ll forget quickly and I’ll think, “I’m forgetting something but I don’t know what.” Some things I’ll always remember, like due dates, routines, people, school stuff, and other things but for things like what I was going to eat for dinner, that can slip right past my mind.

I’m not a spontaneous person. I don’t like having things in my schedule moved around and random things popping up. If I write something down on a list, I’m expecting for it to be checked off as soon as it's done. If I don’t check it off as done by the end of the day, it just bugs me. I find that writing things down, making lists, and planning ahead keeps me more productive and ready.

But ever since quarantine, things have been messy. Even with school, there was no clear set schedule. At school, I would have history first period, English second period, and so on. But when it was online, I had to remember what class was which day and the due date for every assignment. At first, I thought I liked the freedom of it. There was no one telling me I had to do an assignment at a certain time, I could do it whenever I wanted during the day. That was good. It gave me the opportunity to plan out what I wanted. I would try to find a balance of doing an assignment from my favorite classes and my least favorite classes.

But after a while, it started to feel weird. I would forget I had a Zoom meeting that day or I would forget an assignment was due on Wednesday and not Friday. I found myself making a weekly agenda but forgetting to write some things down just because of how new things were coming up every day and some things would get cancelled the day of. It was weird but I had to do my best. I think if I didn’t plan things at all with my weekly planner, I would’ve missed so many classes and assignments.

Now that it’s summer and I don’t really have a set schedule for anything, it does feel weird. I don’t want to make a to-do list because there’s only so little I have to do. Even if there’s something I need to do, I’ll procrastinate to get it done because I tell myself I could do it the next day, and if not then, there’s always the next day. It’s weird to not have a plan.