We must stay optimistic in these times 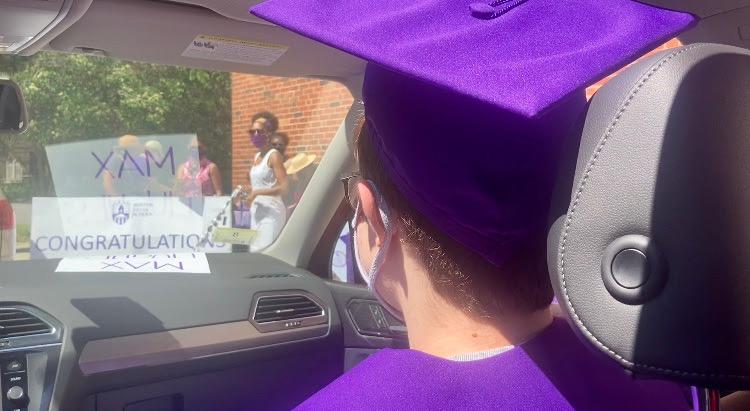 The author wears a purple graduation cap and gown and a mask in a car during a socially-distanced graduation event. Photo courtesy of Maxwell Hughes.

When first told that we would be attending a career day panel, I was a bit apprehensive — I have gone to many career day activities over the past several years, and I wasn’t particularly excited for another… after all, they all seemed very similar after the first couple. Nevertheless, I had to go, as it was one of my work responsibilities this summer during SJI.  Every week on Thursday, we had a virtual panel with different professionals from around the country and world to give us a view of the adult world we would soon be entering.

And despite my feelings going into the panel, I ended up very much so enjoying my time spent there, and here’s why.

It was at this time that I was introduced to Aju John, a member of the Technical staff at Dell, who originally came from India to the U.S. to work for a smaller Tech company. Upon arriving, he was essentially abused by the company and treated very poorly, yet he maintained a positive attitude and was able to find solace in the fact that one of his co-workers was kind enough to help him, giving him a better, more stable place to live and the health care that he needed. He told us how that same woman, after he was sent back home to India, helped him get a full tuition to WPI, where he continued his education, and how he dealt with the racism and discrimination in the workplace. Aju had a story to tell unlike any I have ever heard from anyone else, and had I condemned that panel and not given it my attention, I wouldn’t have learned about one of the most interesting and inspiring people I’ve ever had the pleasure of meeting.

The concept of time has been almost entirely blurred over the past six months. It’s wild to think that in the time that we’ve spent in quarantine, I’ve missed so much of what was promised to me as a teenager.

Graduation, Senior nights, Prom, my eighteenth birthday, all spent in a world where I’m not allowed to make contact with the people outside of my immediate household.  It almost doesn’t feel like I’m living in the same world that I have been for the rest of my life. It’s like we all entered a different reality, where the things we once did and the people we once knew are all closed off to us, somehow so close yet so distant.

We don’t know when a coronavirus cure or vaccine will come out, so we keep hoping it will be tomorrow. And the next day, then the next. We were so naive to believe that nothing like this would ever happen. Even though we all knew it would, we told ourselves it wouldn’t, not asking “when?” would we have a pandemic, but “if?” And of course, we did.

Humans have a funny way of forgetting tragedies despite acting like we remember them. Time and time again, we “honor” the people who died in tragic events through history, both recent and long, long ago. And yet despite this, we don’t remember the actual feeling of what it’s like to suffer in these times. I will always remember the COVID-19 pandemic, but not long after it’s over, life will resume, and I will forget what it was like in a world where I cannot go out freely. Time heals all wounds, they say, yet it’s at moments where time seems to be paused, where it simply makes us forget what it’s like to be at rock bottom.

I was once very happy to sit at home and play video games with my friends for hours on end. When quarantine began, it just seemed like an opportunity to do just that.  But now, five months down the line, life has slowed to a crawl and the things I once was entertained by, merely are a way to pass the time that no longer means anything.

For once, I just want to go do something. Go to the beach, go shopping, go see a movie, do something fun with friends and family that is not simply sitting at home, staring at a screen for hours.  Even college, which starts for me remotely, is going to be just looking at a screen endlessly.

And while the last several months have all been summer months, it just simply doesn’t feel that way.

I miss the water. I miss going outside and doing fun stuff in the sun.  I miss breathing the warm summer air, without the barrier of a mask. I just miss life the way it normally is, and I know I’m not alone.

It’s very easy to be cynical at a time like this, see the worst in every scenario, and yet despite that, it’s during times like this that we need to search for the silver lining and try to be optimistic. Do things that you once did with friends, albeit in a responsible way, and try to have fun. We’re more than likely going to be in quarantine for a while, and keeping ourselves interested and engaged in life and all it has to offer is more important now than ever.