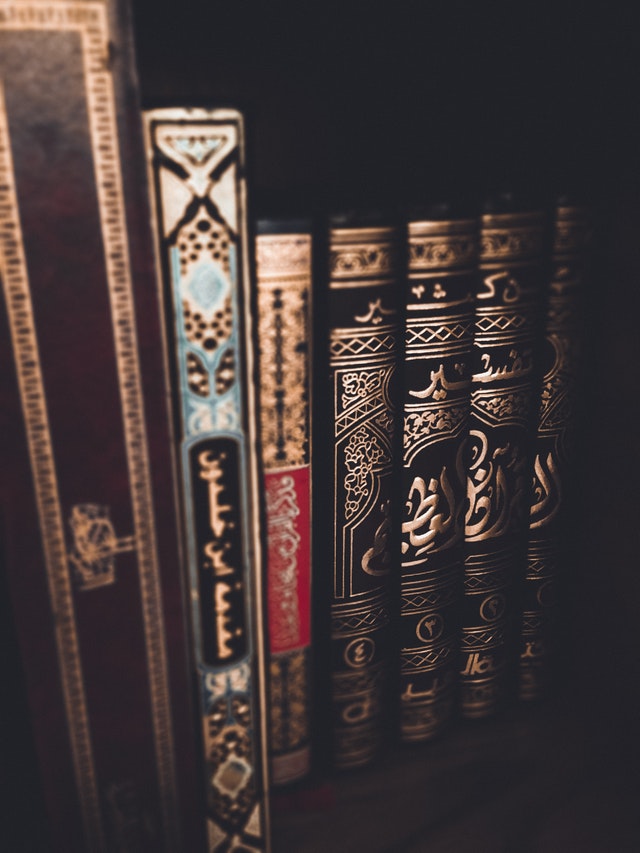 Books with Arabic writing on the spines. Photo courtesy of Abene on Unsplash.

“Elizabeth, what are you doing this summer?” my mom’s voice interrupted me from my book.

“I don’t know. Crew, I guess,” I answered, looking up. It was the beginning of summer, and I was looking forward to long, lazy days before ninth grade.

“There’s a free Arabic program in July. You want to do that?”

“They give out free lunches. And you’re not doing anything, anyway.”

And so I found myself taking the orange line to Charlestown High School. My brother was with me on that first day so I wouldn’t get lost. As we rode the train, he told me how lucky I was and how he wished he were young enough to participate in this program. I nodded, but I was nervous about learning a language I knew nothing of.

After several wrong turns, even with my brother, we eventually reached the school that hosted the Arabic Summer Academy. We waved goodbye, and I wished I was going home with him.

When I stepped inside, a teacher welcomed me and started speaking to me in Arabic. I had no idea what he was saying, but he seemed friendly, so I smiled.

I was relieved there were beginners just like me. We split up into groups based on our levels, and I spent that day learning basic Arabic greetings. When it was time to go, I realized I had laughed a lot and couldn’t wait for the next day.

Arabic class became something I looked forward to rather than a chore I had to complete. I found the language so interesting, beautiful, and simple yet complex. Little did I know that my mom’s prodding for me to attend the Arabic Summer Academy would shape the next three years of my life and beyond.

I was pacing around in my room, practicing Arabic with CDs I had borrowed from the library. With the lockdown came more time to study Arabic. At first, it was a hard habit to get into. I would easily be sidetracked by the books on my shelves or zone out even without any distractions. And since there was no rewind button on the bright red boombox I had received many Christmases ago, focusing was crucial.

I sighed. Even after I had cleaned them, the discs were so scratched that this wasn’t a new occurrence. I paused the CD and then pressed play again, but it was no use. I skipped the lesson, hoping I wouldn’t be too lost on the next one. Self-studying had its setbacks, but I set my jaw and pushed myself to study every day.

In late summer, I applied to take fall Arabic courses at the School for International Training (SIT). I didn’t know if I was able to manage both school and Arabic classes at the same time, but I wanted to give myself options.

A few weeks after I submitted my application, I opened up my laptop to an email starting with “Congratulations!” My face broke into a grin, and I rushed to tell my parents.

Although I was happy, I wondered if I should secure my position at SIT. Did I have time for it? Was I willing to challenge myself with Arabic classes on top of school and extracurriculars? Though I wanted to very much, school was more important.

I had long periods of debate with my family and made several pros and cons lists, but my parents reminded me that ultimately, it was up to me to choose.

I’ve always been the type to play it safe, but Arabic was something I loved. So I decided to take a chance. ‍

My Arabic studies exposed me to opportunities, and one program caught my eye: the National Security Language Initiative for Youth. It was a fully-funded summer study abroad program with sites in Jordan, Morocco, and Egypt. Fully-funded.

My dream was to travel to the Greater Middle East, so I wearily started the behemoth of the application, spending hours writing my essays snuggled in my room. My parents and siblings gave me feedback, I edited them, and this process repeated itself several more times.

Several days before the results came out in April, I was notified that the program would be virtual due to the coronavirus. Part of me felt like I shouldn’t care when I hadn’t even been accepted yet. Still, I was crushed. Yes, I hadn’t gotten in yet, but I had devoted hours and hours typing out my application and preparing for the interview, all for something that wasn’t even the real thing.

Still, I remember screaming at the top of my lungs when I got in. For a moment, I forgot about its virtual platform — I was just so happy.

Telling myself that I couldn’t expect too much, I went to my first class. My teacher quickly reviewed question words he expected us to already know, and my two other classmates nodded along. But I had never learned them. It was a rough day. I was scared to ask questions I assumed my classmates didn’t have.

By the end of the first week, however, I got the hang of it. With lessons and homework leveling the playing field a bit, I became braver in class. I participated more and wasn’t deterred by the number of times I got the wrong answer. And I learned a lot — more than I had expected to over Zoom.

I don't know what next year holds, but I want to travel to Jordan or Morocco eventually. Arabic has gone from something I had never given a second thought to a part of my life I couldn’t imagine myself without, and all because I had tried something new.