The struggle of having an anxiety disorder 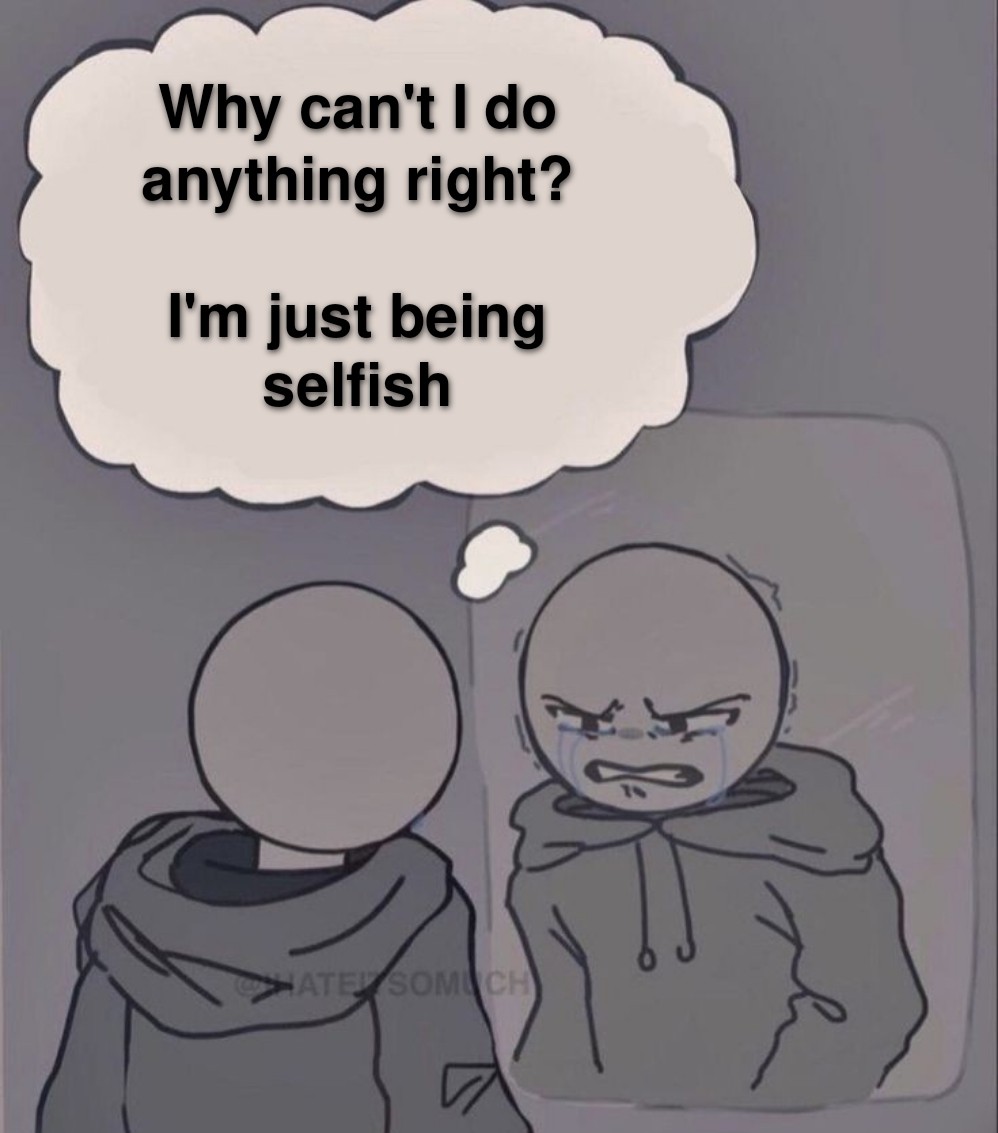 A meme of a person crying while looking in the mirror, with a thought bubble that says, "Why can't I do anything right? I'm just being selfish."

Growing up in Jamaica can come with its ups and downs. For one, you live on an island where it’s always sunny. On the other hand, a lot of people have a hard time acknowledging new concepts.

For example, no one talked about their problems with mental health. It was frowned upon even by doctors. Around third grade, I tried telling doctors how I felt. They would say, “Why are you stressing yourself out?,” or “You have no reason to feel that way, back in my day I had more problems,” or “ You’re lucky, I had things worse.”

It was already hard to talk about my emotions, and to feel like your emotions were less important made it worse for me. The doctors made my feelings seem insignificant. It was as if they were saying, “You shouldn’t be feeling this way because people go through way worse.”  This made me feel guilty for the way I was feeling. So I just didn’t talk about it at all, which of course made my mental health worse as time went on.

People would look at me and say, “She’s so happy” or “Her life must be perfect.” Since I never opened up about the way I was feeling, who else wouldn’t assume that? I would. That’s what happens when you wear a mask that hides how you truly feel. It’s as if you’re constantly masquerading as someone you’re not.

My thoughts were constantly eating me up inside. That little voice in my head was constantly reminding me. It said things like, “You aren’t good enough” or “You’re gonna fail no matter how hard you try.” This little voice grew. It made me feel as if everywhere I would go people would judge everything I did. This made me self-isolate. Away from friends and family — well, other than my mom, but I still didn’t say anything about the way I was feeling.

By fourth grade, I was known as “the loner.” The self-isolation led me to lose the few friends I had developed over the years. I had withdrawn myself from everything and everyone. My anxiety got worse and I started having shakings for an unknown reason. My body would shake, making it hard to even do anything at school. Ironically, I started to get panic attacks with it.

I couldn’t hide this any longer since it was clearly visible to those around me no matter how much I tried to isolate myself. I went to the doctor. They simply said, “It’s just nerves” or, “She’s the one who’s doing it; she’s faking it.”

Attention was on me. I hated every second of it. I blamed myself even though I had no control over what was happening to me.

I then started to believe what the doctors were saying. “I was faking it; I had to be,” I used to think to myself.

By the sixth grade, I started to drown myself in school work. I figured it would make sense since that’s the only thing I thought I was good at. I started to focus on myself less. I abandoned my hobbies; everything that brought me joy. I used all that extra time to focus on my studies. I did well in my mind. I passed for a good high school student. Everyone was proud of me, but I still found ways to degrade myself. I would say things like, “You aren’t trying hard enough” or “You’re going to fail no matter how hard you try so what’s the point in all of this.”

I was my own worst critic. I couldn’t find one good review.

Time passed and my mother and I decided to get a better life in a country with multiple opportunities. I was 13 when we moved to the United States.

The big move made my mental health even worse. I started middle school online because of the Covid-19 restrictions.

The shaking began to get worse.They were even more noticeable. I started having them in my feet, more in my hands, my neck. Basically everywhere you can think of. On top of that, I started to say things involuntarily. Anything I heard too much would just come out.  I would start to “bark” because I heard a dog in the neighborhood. When the science teacher started to play “Bill Nye The Science Guy” in class, I would start to scream the theme song randomly because the memory of it came to mind. I even almost outed myself because I started to scream “gay” every five seconds.

That night things took a slight turn. I was diagnosed with a tic and an anxiety disorder.

I was somewhat relieved. For once I knew that it wasn’t something that I was making up or that I wasn’t exaggerating the way I was feeling.

Now, I’m in therapy and have started taking medication.

I’m taking time to learn more about myself and hopefully with time I will start to open up more.  But I’ve learned having an illness/disorder does not have to deter you from accomplishing whatever you put your mind to. It may be challenging at first but so is everything in life. It might just take time, and we all need to learn to give ourselves time.

I’ve picked up new hobbies. Astrology was on the top of the list. My new love for crystals is a close second.

But giving yourself more attention and taking time out for self-care makes you more aware and happier. Being open and honest has made me feel like I’ve just found the best part of myself.

Just know that you don’t have to be alone. There will always be someone out there who relates to you, someone who understands exactly what you’re going through.  Someone out there will reassure you that things can get better and will tell you that you should give yourself time to learn and grow into the best version of yourself.  Don’t doubt yourself whenever you feel as if something is wrong. Never let someone’s opinion about you negatively impact the way you feel. You need to take yourself seriously and get the help you need.