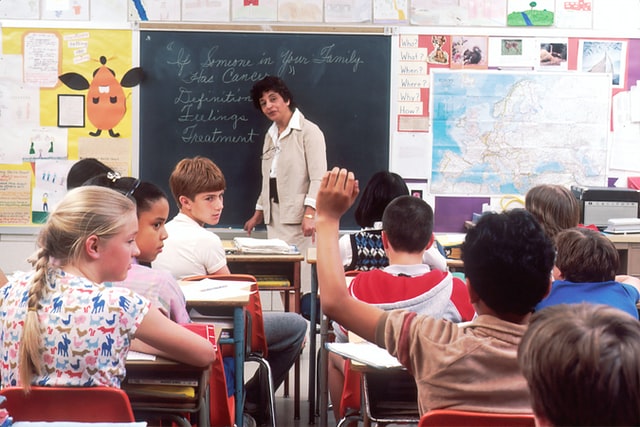 Children in a Classroom. In the back of a classroom, are children about 11 years old with a female teacher talking about the subject - "If Someone in Your Family Has Cancer." Photograph by Michael Anderson, photo courtesy of the National Cancer Institute on Unsplash.

For part of my elementary school years, I attended a school with a very arts-focused curriculum; one without traditional grades and a non-existent emphasis on standardized testing, except when the state required exams rolled around. The model of this school was made as a counter to traditional, exam-based schooling, and focused on the various needs of students. It heavily incorporated things like art, music, games, frequent peer-socialization, and movement into the lessons. This model worked well for many students but, as a very shy, academically-oriented person with a learning disorder that prevented any skill in art or sports, I struggled in this environment.

Due to the model of the American public education system, this is a struggle that a lot of students have dealt with in some regard. Many have found themselves to have a hard time with essay writing, or have felt stupid because they haven’t learned the math that their district’s standards say they should have learned at their age. This is because the public education system is incredibly one-size-fits-all; a model that’s failing students and teachers alike.

Students have many needs for learning and many ways to demonstrate what they know. Despite this, most classrooms still have all their students show mastery through essays, standardized assessments, discussions, and projects with little variety. The few that break this mold and incorporate things like music, videography, or art into their assessments still force all students to use one of these methods, rather than letting them choose what they think will best portray their knowledge.

A student with a passion for academic writing could be forced to create a diorama, while a student at a different school who loves art and music could have to take a multiple-choice quiz. Both of them could understand the content well, but get a low grade simply because of the medium they were required to use. With an emphasis on how students show what they know, rather than on them knowing things, the education system sets many children up for academic failure.

Along with hurting students on an academic level, the education system hurts students’ behavioral learning. One example of this comes from how schools enforce “good” behaviors and discourage “bad” ones. Many schools, especially with younger children, punish and/or reward kids publicly, so schools can uphold “model students” — the ones who conform to the school system’s rigid expectation of what appropriate behavior looks like. This simultaneously shames kids who don’t learn best from sitting still, or who joke because humor helps them understand concepts, making them look like they’re “worse” than their peers simply because of their learning style.

In an opinion piece that speaks on the behavioral effects of the education system, elementary school teacher Lily Howard Scott speaks on how a model of behavior tracking that categorizes various behaviors by color, then assigns students’ names to the corresponding color can harm children.

“A few students may benefit from the individualized, private support of a color-coded behavior plan,” she said. “But another student — who, let’s say, thrives on positive reinforcement — may become hysterical when his pin is moved from ‘good’ green to ‘less good’ yellow in front of all of his peers.”

This is just one of many examples Howard Scott provides for how the education system has become too formulaic with the way it disciplines students, and how this can cause nothing but harm for some children, depending on their learning style and social-emotional development stage.

What’s more, this harmful model doesn’t just hurt students while they’re students. It has lingering impacts on them in their college and adult lives as well. One reason for this is that schools teach students to write for essays, tests, and other standardized assessments almost exclusively.

Jenny Miller, a former teacher and current teaching faculty and program supervisor at University of Massachusetts, Boston, says that the writing kids are taught in school doesn’t correlate with the “real world” writing they’ll need in the future.

This lack of “real world” writing is just one demonstration of how school doesn’t prepare students for the future. We also see this when examining the classes that students in high school are required to take. Despite being just years from adulthood, the education system forces these kids into studying things like calculus and English literature, with little or no opportunities to learn common life skills, such as how to get a job, budget, or simply care for themselves and others. This problem only seems to be getting worse as classes like home economics and vocational electives are becoming nearly obsolete in the 21st century. The world expects students to be passive learners one day and productive members of society the next, with no preparation to be the latter.

Students aren’t the only ones being harmed by the one-size-fits-all model of public education. This model also takes away from teachers and often stifles their abilities. Teachers who entered the field with a passion for education and a desire to teach students in creative ways find themselves forced to teach formulaic lessons, many that are only made to prepare students for standardized testing.

“Education reformers are pushing a routinized, one-size-fits-all approach to instruction and classroom culture,” Howard Scott explained. “[Teachers are] asked to ignore their instincts and faced with an increasingly systematized, deadening job.” This combination of uninspired teaching and difficult, generic standards can make the education experience a bad one for everyone involved.

Yet, even with all these issues, the education system isn’t a lost cause. For one thing, the increasing commonality of alternatives to traditional, test-based curriculums shows people are starting to recognize the need to reform, and that there is some possibility of change.

Many teachers are also optimistic about newer standards in education, such as Common Core, that rely more on student mastery than just letter grades. Miller even says that many of these standards are helpful both to students and teachers as they measure student understanding and bring more diversity to what teachers are required to teach. She explains that many standards in education are valuable and that the problems come from only having one way to measure students meeting them.

All this to say, the education system, despite its problems, has the potential to be a system that truly helps, educates, and prepares children for the real world. But until it’s been reformed, it won’t reach that potential.

That’s why it’s so important that we continue to call out these problems, support diversity in both teachers and teaching styles, and encourage student creativity. The education system can change for the better, but it will go nowhere unless people continue to fight for that reform. For if the education system changes enough to allow one more student to feel successful, or one more teacher to trust their own expertise, it means that progress is truly possible.