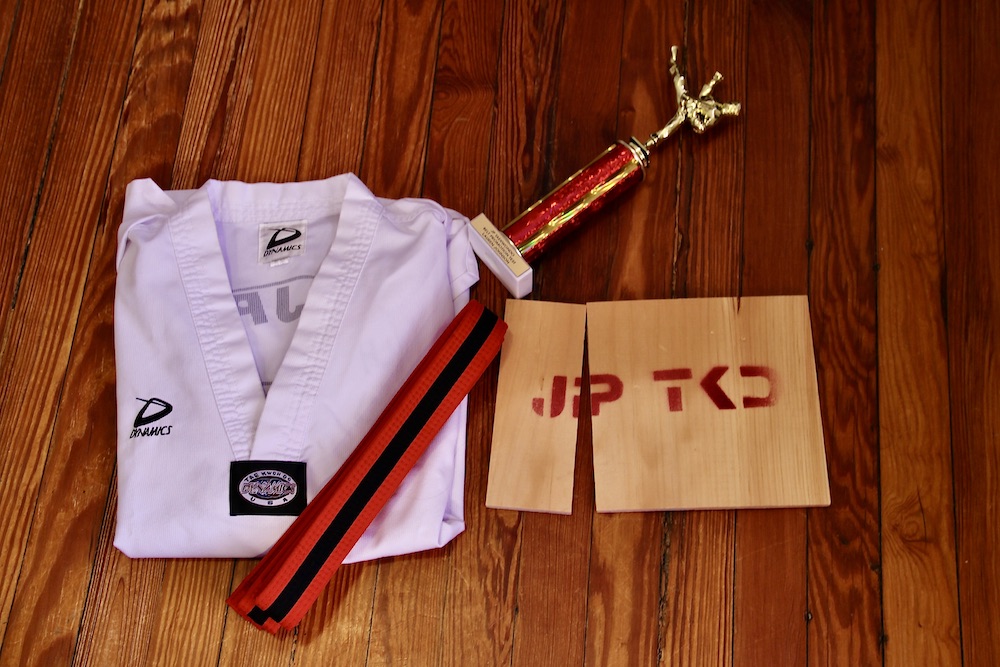 The author's Taekwondo uniform, red belt with a black stripe, trophy, and broken wooden board. Photo taken by the author.

When I was 12 years old, I decided to try a new sport: taekwondo. This new interest came from wanting to be able to fight my brother, and also my guilty pleasure that was watching videos of people breaking boards in crazy ways. I started going to a local class once a week, learning the basics of taekwondo and growing to love the sport even more than I thought I would. I eventually convinced my brother and my mom to join, and it became a family activity.

Taekwondo was something very new for me. I was always into team sports, playing soccer, baseball, softball, and lacrosse throughout childhood. While those sports are focused on running, teamwork and wanting to win, taekwondo is completely different, you need to have patience, focus, and A LOT of balance. Despite entering the brand new world of martial arts, I immediately loved it. Learning how to balance, memorize complex movements, and of course, break boards, was intriguing. I couldn’t get enough. The first time I ever meditated was in my first taekwondo lesson, and I have learned to incorporate meditation into my daily routine.

I have stuck with taekwondo for five years, gaining more and more knowledge and advancing through the belt ranking system, all the way up to being a junior black belt today.  With every new colored belt came more pride and confidence in my abilities, but with it also came some social struggles and embarrassment. I never used to tell anyone besides my closest friends that I did taekwondo because it was an uncommon sport, and I wasn’t the typical person who would be interested in it. I was afraid that people would think I was weird because I was into martial arts, so I kept it hidden for a long time.

I don’t look like the typical person who does taekwondo. I am not Korean. I am female, and I dress and act pretty femininely. When I walked into class that first day, I was the oldest student, the only girl, and one of few white students in the class. Many people think that only strong men are able to do cool moves and break boards with their hands and feet, but it just takes practice and determination.

I eventually started telling more and more people, and many of them thought that it was cool. It is still unexpected, but it is a conversation-starter and allows me to share how amazing taekwondo is with others. I usually have to explain that taekwondo is not really about fighting (contrary to popular belief) but more about focus and stability through movement.

Whenever I tell people that I do taekwondo, they never expect it. Once I tell them what taekwondo is all about, they always accept it in the end. I was under the impression that people would think I was weird because of it, but it actually just makes me unique. And being weird is never a bad thing, I just needed to learn to embrace and accept it, which I have begun to do. And now, while fighting with my brother is still something I like to do, taekwondo means so much more to me than that; it is an escape from the constant chaos that is life.

It doesn’t matter what other people think about your interests, but having a support system is great. If the thoughts of others are holding you back from trying a new sport or any other interest, forget about what they think. In the end, what you like is all that matters, and true friends will understand and accept that.