Standing out in a crowd of identical people 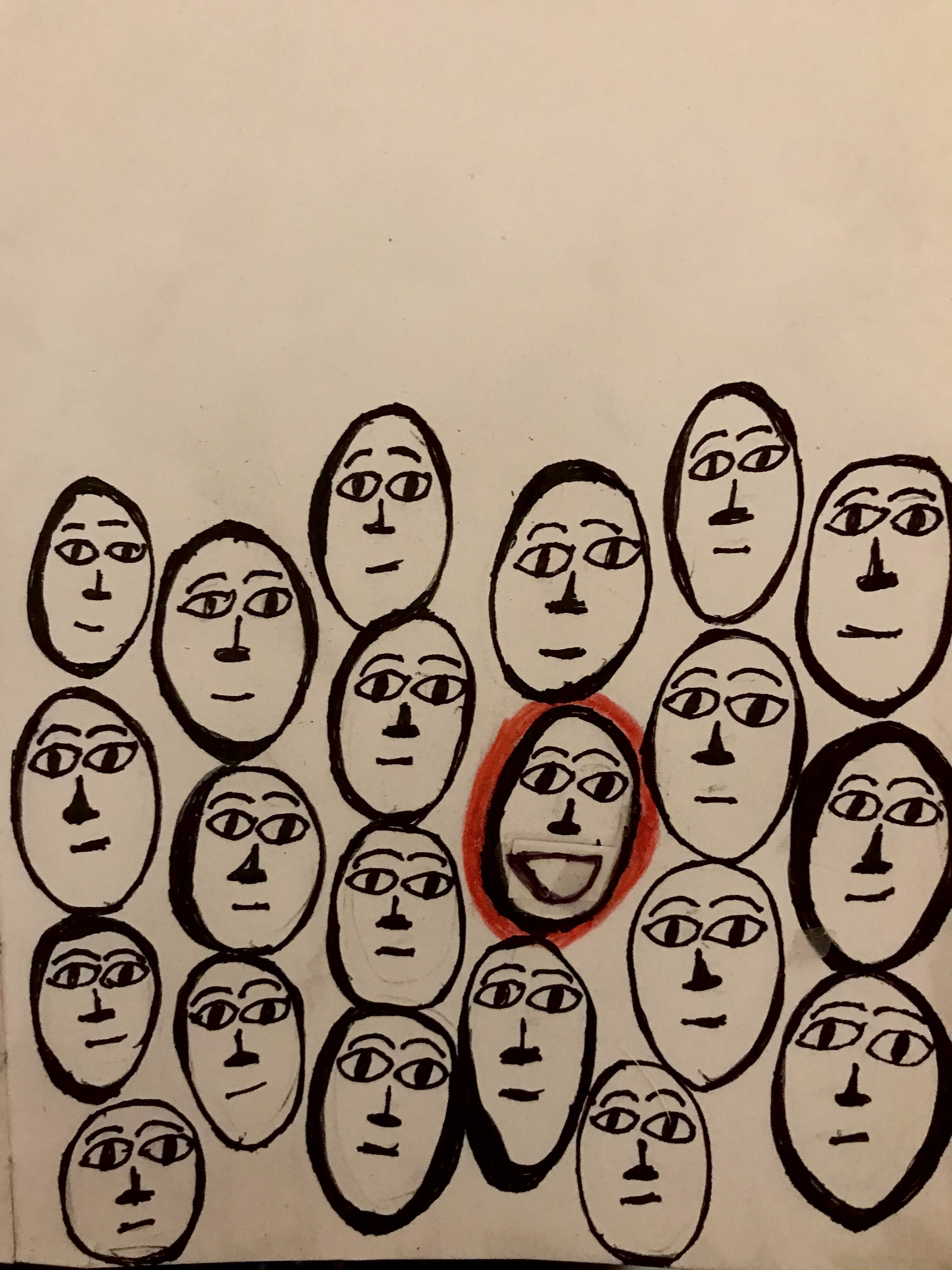 Drawings of faces in black outlines, with one outlined in red in the middle. Art by the author.

“Anna,” my teacher starts reading her list of names.

“Here,” a voice responds from the back of the room. My teacher continues through her list, while my heart feels like it is about to burst out of my chest. In my 14 years of being alive I have met hundreds of new people, and we always go back and forth on my name. Xochitl isn’t a name you see on gas station magnets or on gift store key chains, even though every time I enter a gas station or gift store I spin the rack hoping to see it. Xochitl is an Aztec word meaning “flower” and was also the name of a goddess.

My teacher is almost at my name. I usually wouldn’t be nervous about attendance but because this is a new school, not that many people know me I know it will be awkward when she gets to my name. There’s a long pause as my teacher stares at her list, and I know it’s my turn to say “here.” There are two ways people react to reading my name, either trying to sound it out horribly or not even attempting to do so. She takes the ladder.

“Here,” I say. She looks up from her paper, about to ask the question I have answered a thousand times.

“How do you pronounce it?”

“So-chee, like Sophie but So-chee.” I hoped that would be enough.

“Wow that’s such a cool name, what does it mean?”

“That’s nice, I’m going to write that down, so-chee, nice,” I smile, nodding my head as she continues down her list, hoping my face isn’t as red as I think it is.

When I was younger, I always wanted to change my name. My friends and I played a lot of make-believe games, and I would always want my name to be Rose. I liked Rose because it was simple. No one ever got it wrong. I used to not like that my name singled me out and made me unique because I liked being the person that always flew under everyone's radar. I never understood why people didn’t understand how to say my name, and over the years it made me angry. Now I have learned to laugh at some of the pronunciations I get.

I have learned to appreciate my name because your name is the first layer of introducing yourself to new people. Usually, when you meet someone for the first time you tell them your name and there is sometimes an awkward silence since you don’t know them that well. My name has an introduction and story that always goes with it. When I tell people my name we go back and forth on how it is pronounced, which then leads into its origins, and I get to start telling my story. Having a non “normal” name makes people remember it even harder and helps me have a lasting effect on them. The next time they see me, they will remember who I am.

As important as I think my name is to who I am, I am also much more than that. I am a person mixed with a lot of different things that I also have to explain when I meet people. Since I will never fit into one of the categories people want me to, I am always looking in from the outside. I used to be anxious about meeting new people because there would always be a weird moment when I’d have to repeat my name multiple times. Over time I realized that I will always be different from the people around me because it is hard for others to wrap their heads around what boxes I check. Being so different has helped me to stand out in a crowd, which helped me learn that I shouldn’t change who I am just to give other people an easier time. This has helped me to always have my voice heard by others because all my life I have had to speak up for myself and who I am.

I became proud of my name because I realized that I am slowly changing what people think of as “normal names.” I think it is important for people’s idea of normal to be challenged in order for everyone to become more inclusive. As the years go on, I think that our generation will branch out and name their children a variety of different names. I hope people won’t be dismayed by my experiences but instead understand that having a unique name gave me a push to become more confident. I realize now that I wanted to pretend I had a different name because all the people I came in contact with made me feel like my name was strange, not special. I had to tell myself that standing out in a crowd was important when it helped me share who I was. For anyone out there who has walked to the rack of souvenirs hoping to find your name, I understand your frustration, instead of hiding behind our differences let's celebrate them.