Something about video games... 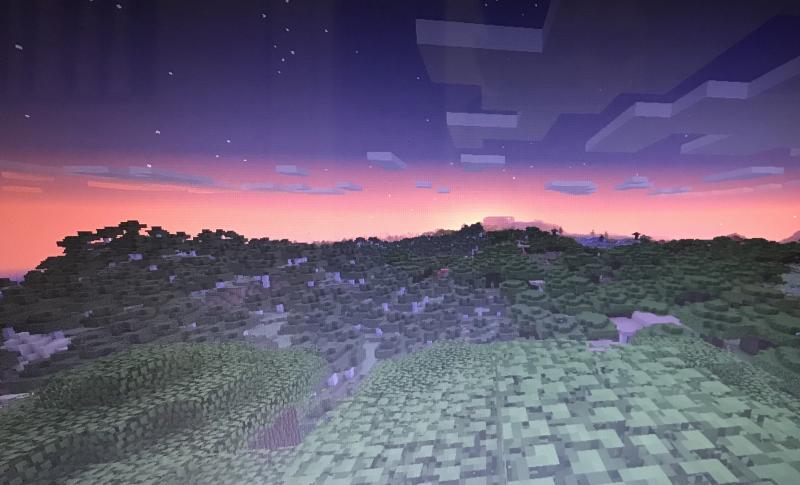 Sunrise over the author's tree-filled Minecraft world. Photo courtesy of the author.

Everyone remembers their first video game. It doesn’t matter what or when it was, but I think this applies to everyone. There’s a certain charm that comes with it.

For me, as a little kid, my parents wanted me to go outside and do normal kid stuff, but I wasn’t that type of guy. I usually stayed inside and if I was going outside, well, my parents were probably forcing me. And, probably so I wouldn’t be annoying them all day inside, my parents introduced me to video games.

The first video game I ever played was “Plants vs. Zombies.” It’s a game set in this cartoonish, post-apocalyptic world. As a player, there are a bunch of zombies who want to invade your house and eat your brains, and you just want to — well, prevent that by using a bunch of plants with different abilities to attack them. You are trying to get past all the levels and ultimately get to the final boss, Dr. Zomboss … which I am just now realizing is not a very creative name. For me, it was initially a bit weird, but I quickly got used to it. To be honest, I wasn’t “wowed” at first, but as I moved through the game, I, accordingly, got to like it more. The game became more challenging as I moved up the levels and was introduced to weirder and buffer zombies to fight and stronger plant comrades. The levels went from some goofy “default” zombies trying to invade through my almost frighteningly green lawn on sunny days to breezy days with peculiar, misshapen zombies almost blitzing their way to my chimney. It really was an idiotic game, yet there was just something about it. The design put an emphasis on a simplicity and the little, playful “challenge” the game would throw your way along with some occasional levels that were way too damn hard. I remember one night, I think I was on a chimney level, I was so mesmerized and focused on the game that it took me a couple of minutes to find that one of my baby teeth had just fallen out of my mouth. That was its charm.

On November 18, 2011, a game called “Minecraft” was released. Around that same time, young me discovered quite the gem of a game. “Minecraft” was a sandbox, a game where I could basically do whatever I wanted. Ironically, its appeal came in the simplicity of the game. It was easy to understand once I got used to it, and once I did, I could use my creativity to the fullest. If I wanted to build a house, fight monsters, or make a farm, I could do that! But in addition to that, I’d be a maniac if I didn’t also tell you about how good Minecraft’s music is. If I’m going to be honest, I’m no musician. I can’t play any instrument half-well. But – there’s just something — something I can’t quite put into words, about the beauty of the music. There’s something about mining or cutting down trees and hearing the faint piano of “Sweden” tickle my ears, something about how most of the time, I can’t even register the music. At least for me, when I play, I’m focused on doing whatever it is I’m doing. But, when the moment comes that I hear it, I am consumed by the realization of the sheer elegance of this game where I can do anything. That is where the true beauty of the game is found.

That aside, another part of the game was that playing with other people was so fun! The game always gave me something to do and having a friend or two with me made it even better. Some of my fondest childhood memories come from playing with friends, ranging from hard parkour, preparing for the night to come, or getting the absolute crap scared out of me from a creeper. Although Minecraft was such a simple game, it’s special, and to so many people too, because of the experiences and the beauty of the game.

Video games might seem trivial, and they are, under most circumstances. But, as I’m sure you’ve heard many times from me, there is “something about them.” Some people, especially of the older generation, might claim that they don’t matter and that young people should spend their time more productively. I can’t exactly blame them for it, but one man’s trash is another one’s treasure. I can’t tell you how special video games are to me, and how special I’m sure they are to others.

If I had a hundred years, I couldn’t adequately describe the feeling games give. And, as weird as it might sound, they have given me so much more than that. For one, I got some life lessons. Honestly, I probably would still behave like a toddler if I hadn’t learned some sportsmanship from playing (and mostly losing) with people I played games with. Strangely, they’ve helped me through hard times, too, and given me a warm place to come back to when I was confused and angry. But, lastly and most importantly, they gave me irreplaceable memories with other people that I’ll never forget.