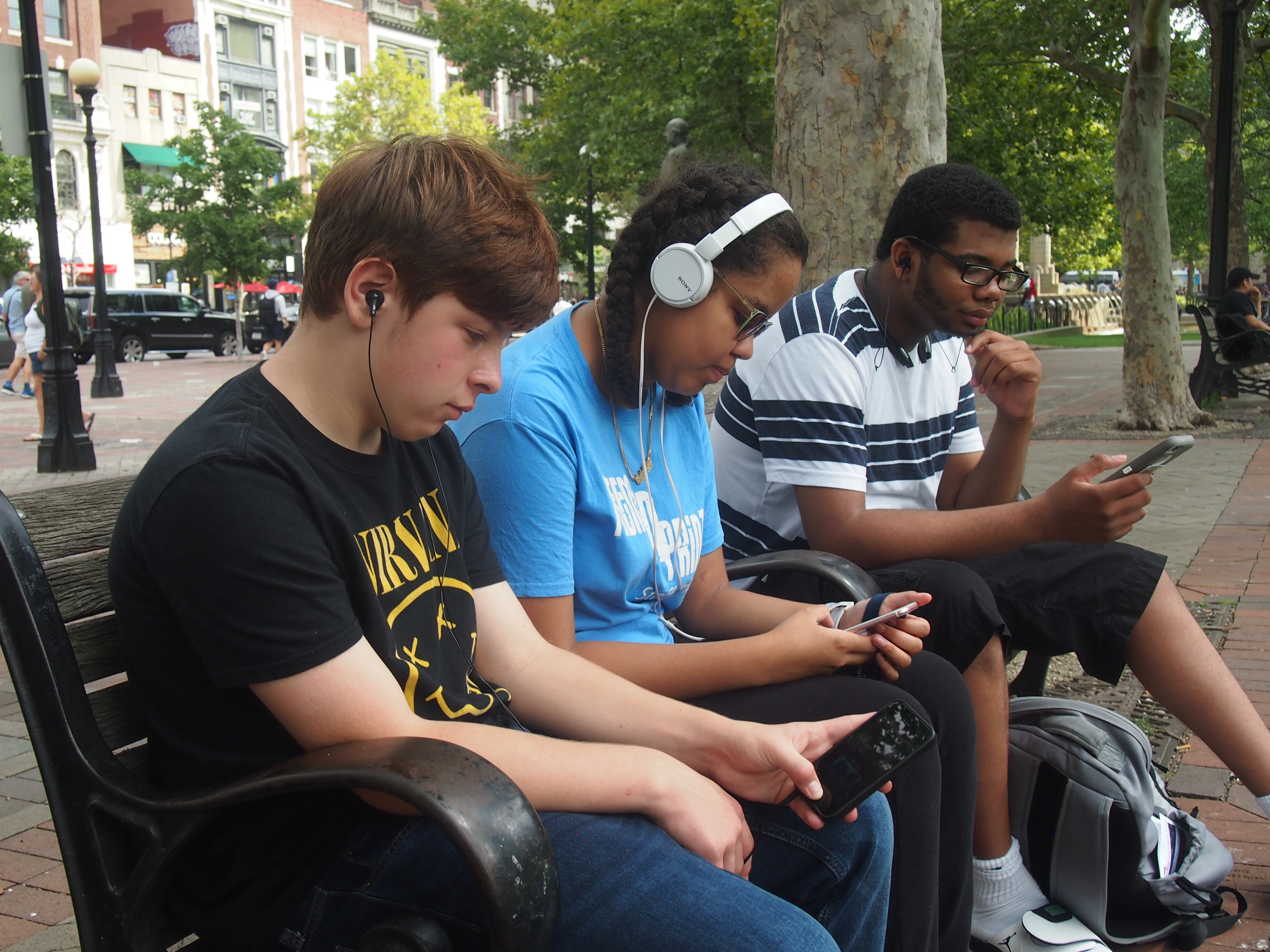 Three teens look at their phones on a park bench. Photo courtesy of Teens in Print's photo library.

We've all experienced the rise of social media in the 21st century, and some of those experiences have not been the best for all of us. Social media is a major factor in teens and young adults' lives, either as a way to communicate or to become more popular. But with every good thing that happens on social media, there always comes a bad. Sometimes people alter images or change the perception of another person, and when that happens, those people tend to go on a downward spiral, or end up not knowing how to deal with it. There is little that can be done to stop it, mostly because people feel warped by the world of social media and have become addicted to it.

The teens who are persuaded by online mutuals, or the young adults that get taken in by the news and can never distinguish between what's factual and what isn't are the ones being harmed. They carry most of the social media today and have a huge impact on each platform that they're on, but they’re unaware of who is trying to find ways to get the majority of people on their side. Since social media’s demographic trends toward young people, some of them have a tendency to be more absent-minded than those who know how to tell right from wrong. Teens who just hop on the bandwagon of something, and who make jabs at random people because they feel like it, are the type of teens who place themselves above everyone else, and try and gain some satisfaction by hurting others. But then those same teens make comments about supporting other people and try to fix the mental health struggles that some may have because of social media. These things are all wrapped into one concept, and that is the way people perceive social media, and what they tend to do with their time on it.

Social media is known for its outlandish mechanisms, and the way it can treat people, and how people can do the exact same thing to each platform. Causing a disruption on social media can either be local between friend groups, or international between every person that is on social media. As Davyahna Eldridge writes in “Teen mental dilemma: unheard” for “Teens in Print,” “Many factors of social media negatively impact teens. Most factors include cyberbullying, sleep deprivation and comparing other people's lives to their own.” See how all of this can just be condensed into one? Nobody in this world can figure the ins and outs of social media. When a trend is running, it goes fast, then it eventually dies out. When someone is being bullied it can happen for a while, but when that person is harmed intensely, everything changes.

Parents and guardians can make the argument about the harmful effects of social media by telling their teens that ‘it's just a phase,’ when in reality, it's not. Sometimes social media, and what people say and do can become really harsh on that person, and I don't think adults realize that. This is because they've never grown up in a society where social media is as prevalent as it is today. Kids were still mean and nasty when they were growing up, but it wasn't to an extent at which people will literally kill themselves over something being shared with a group of people. As Eldridge also wrote in her article, “The issue isn’t that people share their problems with mental health on social media, the problem is them using the topic inappropriately.” These issues that teens are facing can be completely taken out of context and used against them. When that happens, teens tend to struggle more because they don’t feel understood.

Social media is a harmful, but also a beautiful platform because of what people bring to it. When people come together to try and make peace over a certain topic or do something funny that makes people laugh, then that shows the good side of what it's being used for. But when people say and do harmful things to others or bring on misinformation that ultimately affects someone's daily life, that’s something that needs to be tamed. If social media never existed in this century, do you think people would be more aware of other people's feelings, and try and resolve issues faster without everything that they say being twisted? Or do you think life would be exactly the same, and we’d still have those common issues about bullying, and a bias towards others?