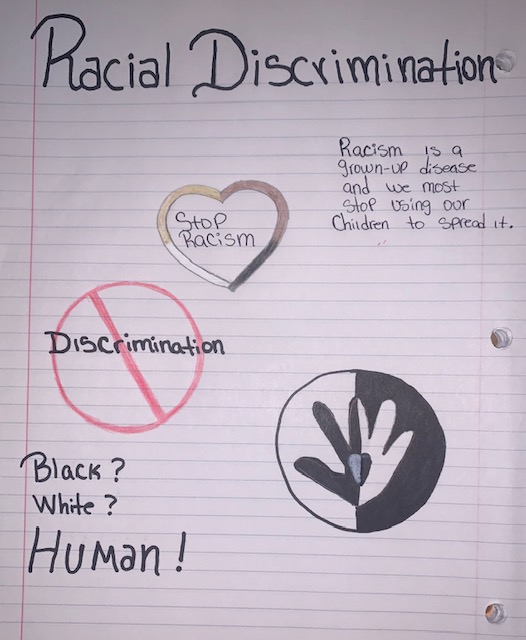 A drawing calling for an end to racial discrimination. Photo courtesy of the author.

In 2018 I was in the eighth grade and recently moved to this country so I didn’t know how to speak English. I could barely speak and I needed someone to help me translate everything. There was an American girl in my school who was born and raised here. We were in the same grade but had different classes because I was an English language learner. But every time she saw me or passed by me she always looked at me and my other friend who also didn’t speak English weirdly. At first, I didn’t understand why she was looking at me weirdly if I haven’t done anything bad to her, I didn’t even know her. I wanted to ask her why she looked at me like that but I didn’t because I didn’t want to get in trouble. I determined she was looking at me like that because I speak Spanish.

There are a lot of people that appreciate and love Hispanics and our culture. They love the food, beaches, and vacations, but as always, nothing is perfect. There are also people that hate and discriminate against Hispanic people because we don’t speak the same language, or because of our skin color. I can’t understand how someone that is just looking for better opportunities in a different country can be hated and discriminated against. Shouldn’t we have opportunities to get ahead in other countries regardless if we are not from this country, or don’t speak the same language?

In the U.S. Hispanic people constitute the largest ethnic minority. We are the second largest group after non-Hispanic Whites in the United States representing 18.5% of the population according to the 2020 census. These people are looking for a better life and opportunities in a country where the majority of people don’t accept them

According to findings from the Pew Research Center, “Shortly before the outbreak, about four in ten Latinos (38%) said they had experienced discrimination in the 12 months prior to the December 2019 survey, such as being criticized for speaking Spanish in public or being told to go back to their home country.”

The findings did show that there were some positive experiences as 30% of Latinos experienced support from someone who also had a Latino background. However, there was still evidence that discrimination was happening more than support because 28% of Hispanics reported they experienced unfair treatment because of their background.

“Meanwhile, about a fifth said they had been called offensive names (21%), been criticized for speaking Spanish in public (20%), or been told to go back to their home country (19%).”

I encourage you to read the entire article so you can learn more about the experiences Hispanic people have gone through. You will also see graphs that show the rates of different forms of discrimination like offensive name-calling, being criticized for speaking Spanish, and being treated unfairly. These are just a few of the different things Hispanic people have to deal with on a daily basis.

People try to justify others’ actions by saying that discrimination is never going to end and the government can’t do anything to change their actions. I know discrimination has always existed but if the government started treating everyone with equity they would start changing the American perspective on immigrants.

This is not happening just with Hispanic and Latino people, there are also African Americans that face discrimination, and racism is worse for them due to the history of this country. There is also hate against Asian people. There have been high-profile violent attacks against Asian Americans ranging from brutal robberies to fatal assaults. This has to stop. We can't live in a state of fear where you can’t even walk down the street without feeling like someone has more privilege than you.