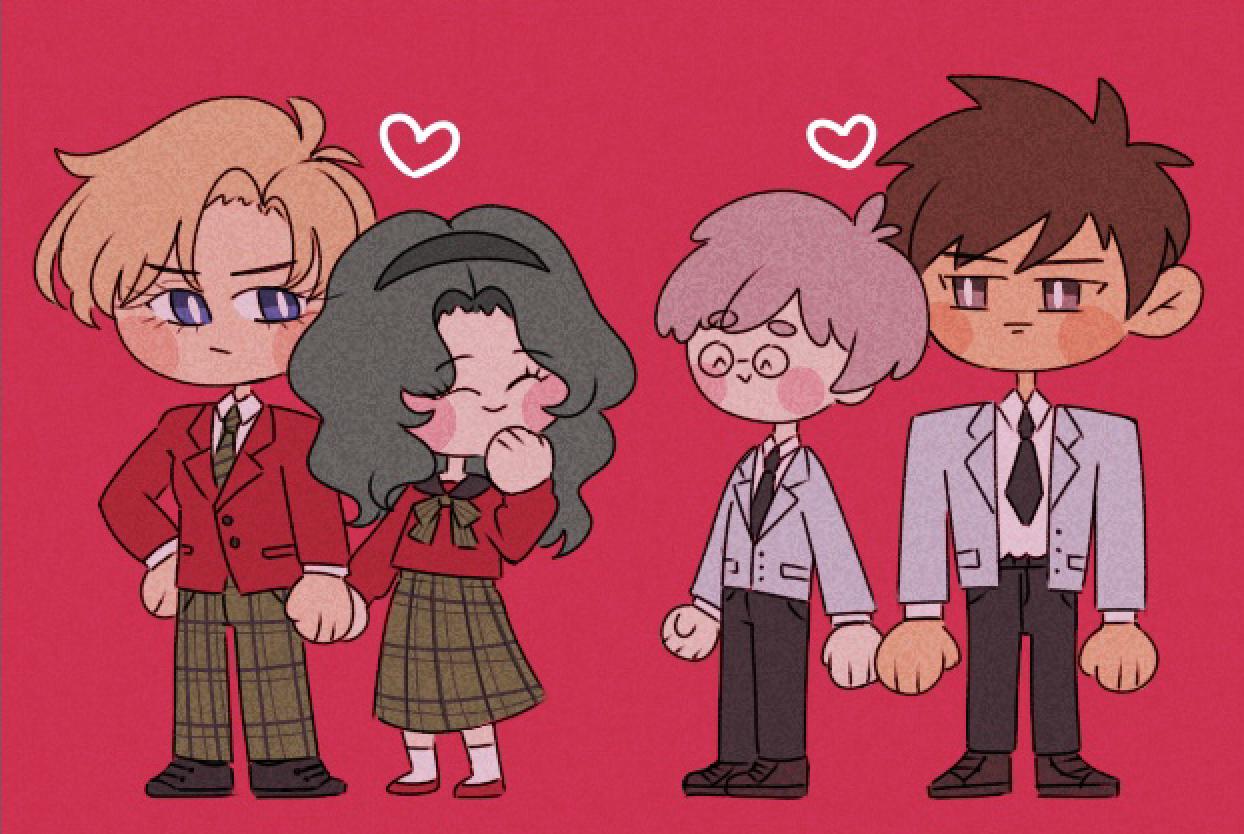 Two cartoon couples standing next to each other. Photo and drawing courtesy of the author.

With some free time on your hands, you decide to surf the web for a new anime to watch. The sea of shows is vast and you continue to scroll until you see a title and cover that seems promising. As you continue to watch, you notice two characters are shown to depend on each other heavily and suggest that their feelings are something more. The romantic and sexual tension between the two is thick, but ultimately, both of them end up being heterosexual. Congrats, you’ve been queerbaited by anime.

Anime, in the simplest terms, is Japanese hand-drawn or computer animation which has been growing in popularity worldwide due to its amazing stories and art style. Whether it’s action-packed like Naruto or a romantic comedy like “Kamisama Kiss,” anime is shown to illustrate these genres perfectly to capture its viewers' hearts but struggles to depict topics about sexual and gender identities.

When it comes to such things, it’s understandable that anime has a hard time portraying LGBTQ+ characters because it is created in a conservative country. Oftentimes, this leads to queerbaiting as characters within the anime are shown to have feelings towards each other, only to have their feelings not addressed or simply dismissed. Animes that do show queer-coded characters often portray them with behavior that is seen as predatory to the average straight male. Other times, the scenes are just outright censored.

Queerbaiting is a serious issue in the entertainment industry and anime is no exception to this. There are many shows where they take advantage of same-sex characters, implying that they have romantic interests in each other, only to have it not addressed or canceled out with a heterosexual relationship. A guilty example of this is “Sound! Euphonium” which suggested the development of romantic feelings between the characters Reina and Kumiko. As it turns out, Kumiko confesses that she is in love with her male teacher, which is very problematic, but also indicates that she is heterosexual. Reina is heartbroken but moves on abnormally quickly. Overall, this anime feeds the misled belief that you simply grow out of loving other girls.

Anime also includes slang words towards LGBTQ+ characters which have been normalized by the anime community. An infamous word known throughout the community is “trap” which is a term used to describe a character who “tricks'' men by pretending they’re a woman. It is often used for comedic purposes, yet the word itself is actually offensive and harmful. “The idea that transgender characters are seen as traps implies that they cause harm to (cis) men and women, which perpetuates the fear-mongering that allows society at large to defend people who murder trans women” according to Alexis Sara from AnimeFeminist. Another controversial term is “yaoi/yuri” which is used to entice their respective audiences (usually straight people) through fetishization of same-sex couples.

Anime shows that do have proper representation are often censored heavily. One notorious example is “Sailor Moon,” a show featuring a team of magical girls and their journey to ward off evil from the world. In the show, two characters named Sailor Neptune and Sailor Uranus are shown to be romantically involved with each other, but I and others who watched this show as children saw their relationship censored as they were shown as cousins in the English version.

As for the original Japanese airing of the show, the girls never explicitly state their love for each other, even though the romantic tension was present in their screen time together. For example, Michiru (Sailor Neptune) teases Haruka (Sailor Uranus) about how every girl (Haruka has flirted with) wants to ride in her car and Sailor Neptune later admits that she’s one of those girls too. In the end, Sailor Uranus says and I quote “I am not letting you go home tonight!” as they ride into the sunset. They clearly have interactions that cousins (hopefully) don’t have.

Another example of a queer anime couple would be in “Cardcaptor Sakura,” in which the main character, Sakura is a magical girl who has to collect magical cards. From there, we learn about the people involved in Sakura’s life, including her older brother Touya. Along the way, we learn that she has a crush on her older brother’s “friend” Yukito, who is often seen side by side with Touya. Yukito and Touya are shown to have a relationship that is defined as more than friends. For example, Yukito has expressed that Touya is “his number one” and both have rejected girls for the sole purpose of being together. Again, these two were subjected to censorship as their moments throughout the original anime were cut out during TV screenings.

An episode dedicated to Yukito and Touya's relationship was also removed from TV for the implications of the two being more than just friends. After the recent revival of the show for its second season, “Cardcaptor Sakura: Clear Card,” CLAMP (the company responsible for Cardcaptor Sakura) has officially labeled Yukito and Touya as “soulmates” in their franchise’s universe. This means Yukito and Touya will always be together even if they are rewritten with different backstories.

Many argue that anime does a great job of representing queer characters and relationships, mainly because they include queer-coded characters into their shows, unlike Western media. This isn’t exactly the case, as these so-called queer characters are often heavily stereotyped and used as comedic relief. It leads its viewers to not take queer characters seriously and promote harmful stereotypes that can be projected onto the LGBTQ+ community. These stereotypes consist of colorful wigs, heavy makeup (especially with thick lipstick), facial hair, and flamboyant attire. Of course, there are gay men or assigned male at birth (AMAB) trans people who dress like this and deserve our respect, but this stereotype is generally depicted as a joke or laughing stock in Japan. Along with the bad representation, it also romanticizes problematic troupes, such as rape and pedophilia in queer relationships.

Anime is a groundbreaking phenomenon, capable of swaying fans from all over the world. It portrays a variety of genres within its well-written stories, yet it still struggles to portray LGBTQ+ themes to its worldwide audience. If anime creators were to go through with accurate queer-coded characters, the entire anime community would not only be educated on new identities, but it’ll also spark more acceptance towards the LGBTQ+ community. Unfortunately, it won’t be easy, considering that LGBTQ+ themes are taboo in Japan, but as the audience, we should strive to educate fellow anime fans about the LGBTQ+ community if the anime creators themselves are pressured not to.