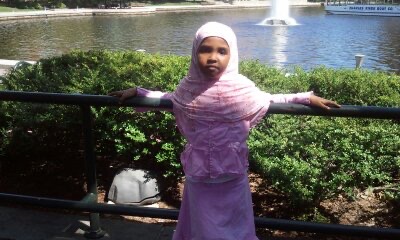 It was a regular day of school, or so I thought. I heard rumors of a new student coming but did not believe it. I was talking to my friends about a story we were writing when suddenly the door swung open to reveal the principal and a girl I had never seen before. Turns out the rumors were true; she was the new kid. My teacher at that time went over to her, and they left the classroom to chat. All my classmates started whispering: “Who is she?” “Do you think she is cool?” “I wonder what she is like.” Although I was curious as to why the principal brought her here, I didn’t pay her any attention. All of a sudden the teacher came back and called me. I followed him out and was informed that I was assigned to her. To make her feel welcome and be her “friend.”

Over the next few days, she would get in trouble and then the teacher would say, “Why can't you be like Khadra?” or “Khadra, you are supposed to help her.” I noticed that as days passed she got more and more distanced and would always give me dirty looks. But I was young so I thought she was in a mad mood or something, so I didn’t pay attention to it. However, that turned out to be my biggest mistake because about two weeks later, I came to class as usual and everyone was staring at me. When I asked what happened, no one answered. I went to my friends and asked what was going on. Turns out she turned everyone against me by starting rumors about me that were not true, but everyone believed her for some reason. As the year went by I felt more and more hopeless and helpless. I kept my distance from the kids and kept it all, which now I know was a bad idea. I could see people say stuff about me because every time I was not near them they would stare and talk while looking at me, but I could not do anything about it. Looking back at it now I never fully understood what happened and why she hated me. Anyway, the overall lesson I learned was to not be so naive and think that everyone will like you or be your friend.

I am in middle school and it is nothing like the rumors that I heard in elementary school. It is quite fun. I go to Up Academy Boston and yes, I know that it is a charter school, ok. People often say charter schools are bad. They might be mad strict but they are not bad. Now I am a different person because I started getting in trouble and getting detention almost every day in seventh grade but by eighth grade... Remember in elementary the teacher decided that the girl should be next to me to learn from me? The same thing happened in middle school. I was seated next to the class clown and he would make me laugh which would land me in detention. I had calmed down and I was back to being that smart good kid that people are cool with. Now you might be thinking “What were you like in sixth grade?” and let me tell you that year was the BEST year ever. I made a lot of friends and I fit in with the school perfectly. But anyway, in eighth grade, third quarter, my school turned into a bad school as there were fire alarms multiple times a day and people were fighting every day. So my dad said, “No sir” and decided to take me out. He was talking about it for a week but I did not believe him. Boy was I wrong. Friday was the end of the school day around 2:34 and me and my girl best friend at that time were out of computer programming and I told her that if I didn’t come to school on Monday, I changed schools. Be careful what you wish for because I was in front of Roxbury Prep, yet another charter school, on Monday at 7:30. I knew right then and there that I was finished and that there was no way I would start over and make new friends in this new school. When I meet new people I can be mad awkward so people don’t talk to me. I have not kept in touch with my friends from Up Academy because I didn’t have a phone back then.

High school is almost every middle school kid’s nightmare. Well, I am here to tell you high school is not that bad. I go to Madison Park Technical Vocational High School. It is all about minding your own business and staying away from trouble. If you do that then you are set for high school. High school is the place where you can make your mark because it might just go away in a blink of an eye as it did for me. For two-quarters of ninth grade, I was in school living my life but out of nowhere there was this pandemic and we were all forced to stay home and have online school. The news was full of people getting the sickness and dying. It put fear in everyone, but we had to go to school online, and I guess in some way it kept us sane. The only time it affected me was when it was the summer of ninth grade going into tenth grade. That was when I hit an all-time low because I got depressed and things were not working out at all. But it is over now and I feel better. I still had to get up mad early to go to school online. But overall I would say I learned that even though you may be shy it’s never too late to start making friends and finding your place.

Anyway if you were to learn anything from my story it is to have fun and keep good people around. I have changed a lot and even though I might not be that naive girl you met in elementary school, I have grown to be strong-hearted and always look out for me because at the end of the day I was born alone and I will die alone. Have a good day or night. BYEEEEE :)