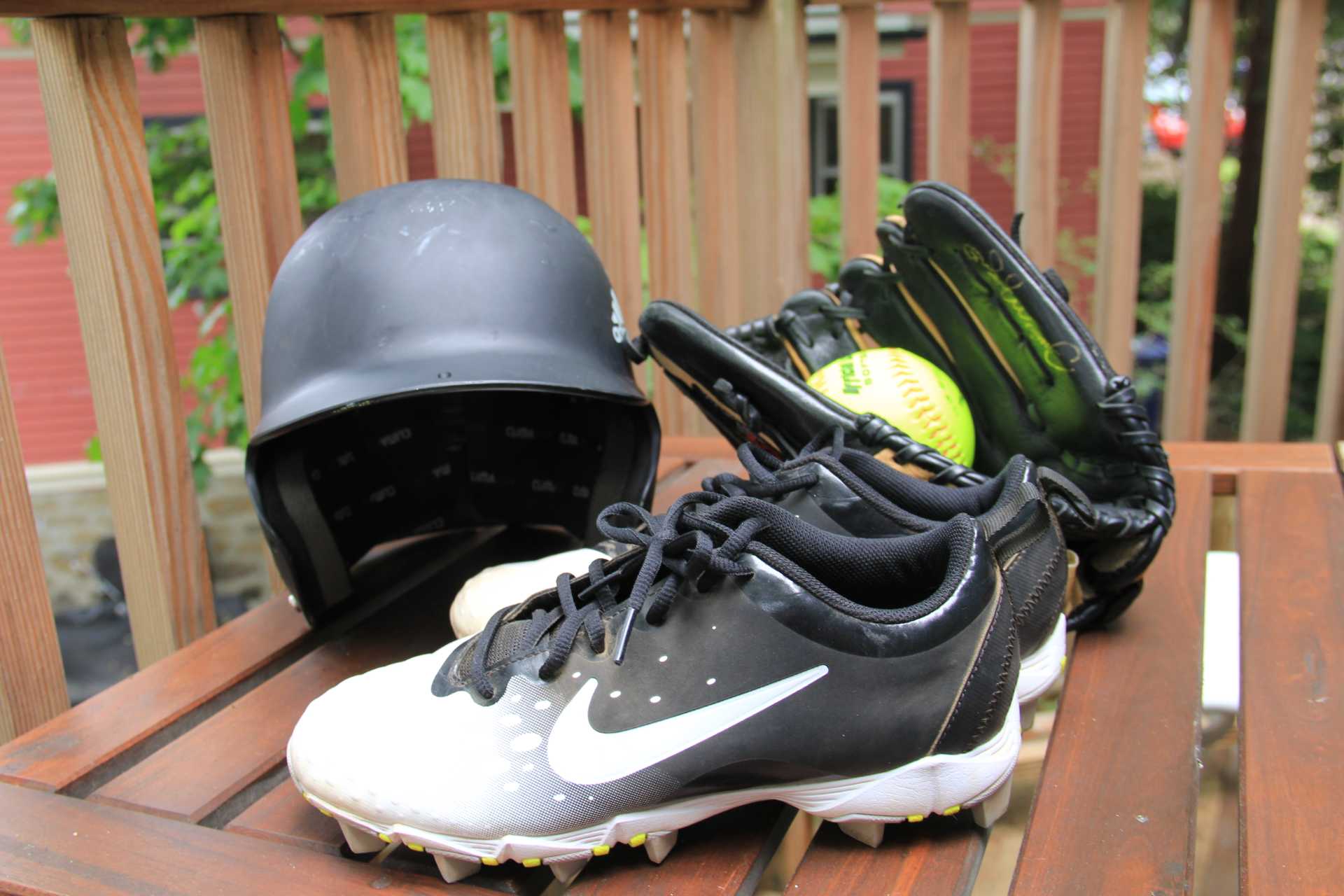 A softball helmet, glove with a softball in it, and one cleat. Photo courtesy of Lauren Johnson.

It was a cold and windy Sunday in April 2016. My dad and I walked up to the softball field for me to try out, not knowing what to expect. The field was not well-kept, the grass was very overgrown and the dirt had turned into mud from the rain on Saturday. There were around five girls already there, as well as three coaches. This was when the nerves set in.

I was 12 years old when I first tried out for softball. I had been playing baseball for three years before that and I had no idea how to play softball. I only knew that the ball was bigger and yellow. What I definitely didn’t expect was that I would be playing fast-pitch instead of slow-pitch, because I was in the older league.

I walked up to the tent and checked in and my dad signed all of the liability waivers while I watched the other girls trying out. After the forms were signed, I nervously said goodbye to my dad as I was dragged away by one of the coaches. We started off by playing a simple game of catch. Every good throw and catch made me slowly lose my nerves and realize that I could actually do this.

Something important to know is that I sucked at baseball. I was always placed in the right field where no balls were ever hit, and when one came I rarely made a good play. I would always freeze up when it was my turn to bat, and I only got on base once in my three years of playing. The coaches were always really supportive of me, but I never felt like I belonged on a team where I was the only girl. That’s why I chose to try out for softball.

The next events were batting and fielding. I was fearing the batting portion most because in baseball I would always freeze up and never swing at strikes. My nerves increased when I realized that this was fast-pitch softball because I thought I would be in the younger league. As the ball came towards me, I thought, just swing. And that’s what I did. I didn’t hit the ball very far, but I hit it, and that’s what matters. That was when I regained my confidence and I was then able to hit a majority of the balls.

Fielding was surprisingly easy. The coaches would hit the balls slightly to the left or right of you, and you have to catch them and throw it back to the pitcher. This is not a very accurate representation of what an actual game looks like, but it was helpful to see what exactly they expected from me during the season. I got through this event with no problem.

Something just clicked in my brain. I could actually play softball, after trying so hard to just be decent at baseball. This was a huge confidence boost for me, and the main reason why I love the sport today.

I remember seeing my dad’s smile as I walked off the field and gave him a high-five. I knew he was proud of me for trying something new. I left tryouts feeling proud of myself, super excited for the upcoming season and with a ton of mud all over my clothes and my brand new cleats.

I was more of a tomboy when I was younger. My mom would always buy me dresses and girly clothes and I would want to wear sweatpants and a sports jersey. I loved going to Red Sox games with my family and in 2013, when my brother decided to start playing baseball, I wanted to try it too.

When I played baseball, it seemed like every adult I told was super happy. I heard the phrase “girls can do anything that boys can do” all the time. They were trying to be supportive and encouraging but it felt more like a challenge at the time. I was never that good at baseball, and I questioned if that statement was true. I thought, If all of these boys can do it, why can’t I?

Even today I still hear it. When I tell people I started playing softball after playing baseball, it’s almost as if they are disappointed. They wish I would have stuck with baseball to prove that girls can do it. The truth is that I could have done it. With a bit more practice and more confidence, I could have been good at baseball. But I didn’t want to. I now know that I don’t have to prove that I can do something to other people. Just knowing that you can is enough. I wanted to be on a team with more girls because sports are also social events. You want to be friends with the people you are on a team with, and I didn’t have that connection when I played baseball.

There are a few key differences between baseball and softball that made the transition somewhat difficult for me. The ball is bigger and heavier and, contrary to popular belief, not soft at all. The pitching style is different: in baseball you pitch overhand but in softball, you do more of a windup and pitch underhand. The field is slightly smaller and there are a few different technical rules between them, but other than that the two sports are very similar.

Almost every girl has heard “girls can do anything that boys can do” at least a few times in their life. People often say this to encourage and support young girls in following their dreams. In many science and math careers, there is not enough female representation. There are also far fewer opportunities for women in professional sports careers. When people say this, they think it is helpful to get girls interested in these professions at a young age in order to increase the representation of women in different professions.

I don’t think the phrase is as helpful as it seems. I am in full support of encouraging young girls to follow their dreams, but the phrase “girls can do anything that boys can do,” isn’t the most encouraging thing to say. For me, it made me see boys as being in a league above girls and that for girls, it is possible to be equal to them, but you have to work harder for it. It made it seem that boys and men are effortlessly able to be the best, and girls and women have to work much harder. In some ways, this is true in society, but it can discourage young women from even attempting to try challenging things. Separating and comparing boys and girls at a young age is part of why we have such a misogynistic society today.

Using this phrase is a step in the right direction, but it could be made better. “Girls can do anything that boys can do” creates a divide and calls for comparison. If we instead said, “girls can do anything,” we would be more encouraging and supportive to young girls trying new things and finding new interests.