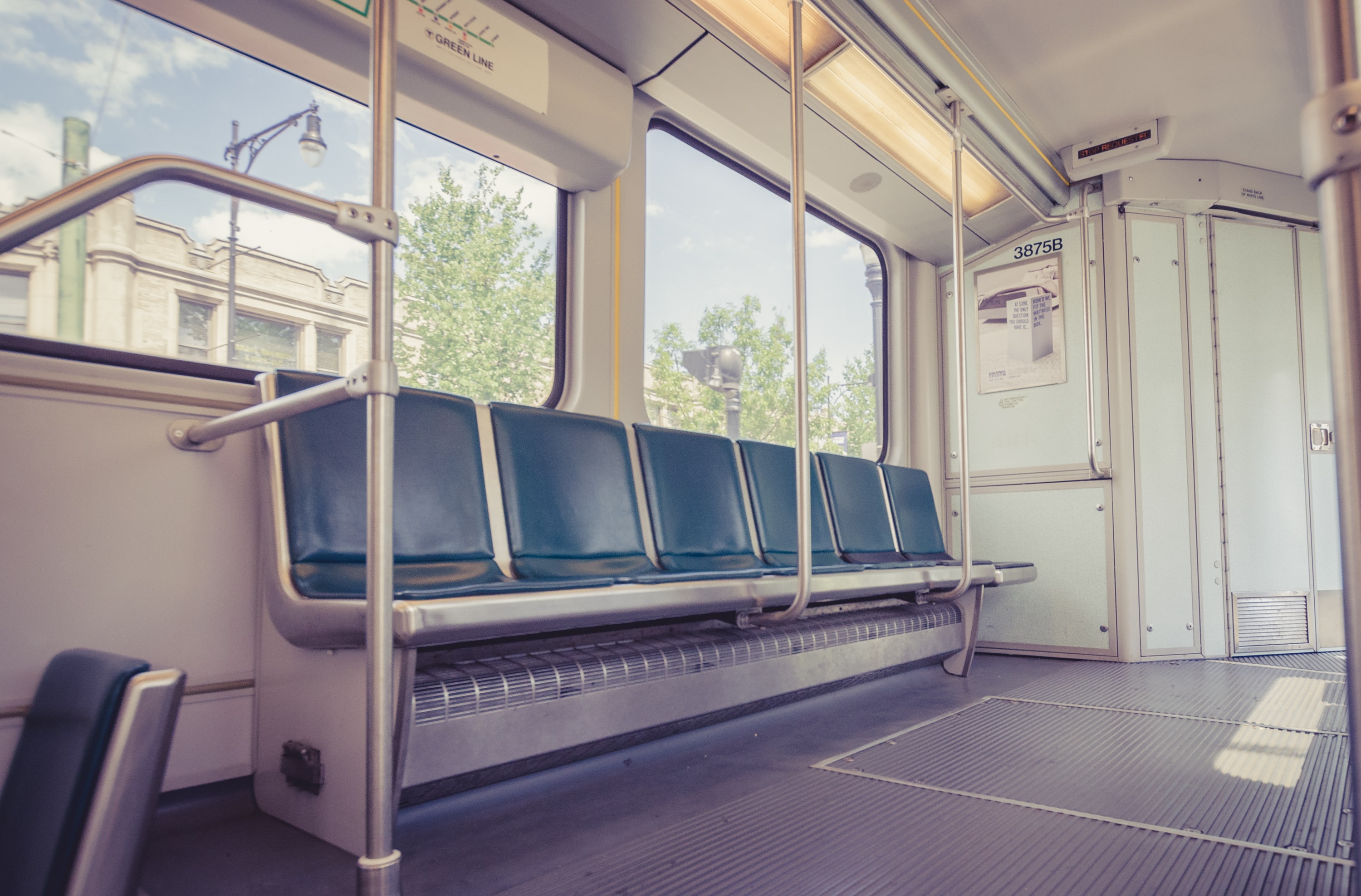 A row of seats on an MBTA green line train car. Photo courtesy of Kelly Sikkema on Unsplash.

To the MBTA, the City Council, the Mayor of Boston, and the Governor of Massachusetts,

I’m writing this letter to encourage people with power to work towards reducing MBTA fares to increase accessibility for low-income workers and residents in the Greater Boston area. MBTA fares are notoriously high and even then, there are talks to raise the fares more and more. For people who depend on the MBTA every day, this is a nightmare.

It’s no secret that the MBTA faces consistent disapproval from its riders and one of the main criticisms it receives is about its fares. In 2019, researchers at MIT conducted a study in which they measured how low-income riders of the MBTA responded to discounted fares. In this study, the riders were asked which out of all the MBTA’s problems were the worst. Affordability ranked in the top four. This study also looked at how lowering fares affects the use of the MBTA. The study found that low-income riders with the discounted CharlieCard took 30% more trips with the MBTA and also used said trips to go to places for medical or social services. Not only would reduced fares increase accessibility to the MBTA for low-income riders, but it would also increase the quality of life for these people. The study proved that people, especially low-income people, are willing to take productive advantage of reduced fares. Last year the MBTA increased its fares and the public disapproval was clear. Fewer people could afford to use the MBTA to get to their destination. Instead of perhaps taking a bus, a train, and then another bus, people are now forced to take just the train or just a bus to save money, not including the ride home. Longer periods of walking or switching train lines and bus routes means that riders will have to change their commuting schedule. A longer commuting period means earlier rising times and later sleeping times. This will ruin productivity in the city and everyone will be affected. It is in Boston’s best interest to make the MBTA as accessible as possible for everyone.

I have not been particularly affected by rising fares. As a student, I am entitled to an M7 which means I don’t pay for bus, train, nor certain zones of the Commuter Rail. Even when I did summer work downtown, my job provided monthly passes. My father was able to drive me to Forest Hills almost every morning for summer work but if he couldn’t my sister and I would drive in her car instead. We could even park at my dad’s job so we didn’t have to burn nine dollars on Forest Hills Parking. Only rarely did my sister and I take the 32 bus, and again, I had my monthly pass. If I were to take full advantage of the MBTA to get to work I would take two buses and a train, costing me a daily total of $13.80. To cut costs I would probably only use one bus route, which would bring down my daily total by just four dollars. I would mean I would still pay almost $10 a day just to get to work. Netflix costs less per month than I would spend per day just to get to my job which I would need to survive. That’s an unfortunate price to pay for public transportation that already has reliability issues. For others on the borders of the city or beyond, the Commuter Rail is another beast. Commuter Rail round trip prices can range from four dollars to twenty-six dollars.

There has been much discussion on how to make the MBTA more affordable. The previously-mentioned MIT study found that by giving low-income riders even a 50% discounted CharlieCard, they were much more likely to use the T. Public officials like Michelle Wu have suggested a “fare-free'' MBTA, but recognizing that is a large change, she specified that this should start in low-income areas first. Councillor Wu suggested slashing fares all around and removing fares on routes dominated by lower-income residents. This might be a step in the right direction. Public transportation should exist to encourage the population to switch to a cheaper, more environment-friendly means of transport as opposed to using cars daily. However, current MBTA fares act as a barrier to this. If a 50% discount was introduced, people on similar routes to my summer one would only have to pay around five dollars. That’s a great improvement, but even so, that can pile up. There are a multitude of other ways to increase affordability. You could remove the cost of one of the means of transportation by making either buses or trains free. Trains are major branches that reach far into the city and buses should act as smaller branches that can reach deeper to bring people to the trains. Buses could be made completely free with trains staying the same or minimally increasing. Another option is creating a system where people can personalize their CharlieCard based on how many trains or buses they need to get to their daily destination. CharlieCards could be equipped with three units: subway, bus, and Commuter Rail. Riders could choose how many of each unit to equip their card with. This could be done on the machines that currently add funds to Charlie Cards or even on a mobile app or website. The technology is certainly there, but it's a matter of interest and will.

There are so many ways for the MBTA to be more affordable. According to Boston Magazine, fares only account for 20% of the MBTA’s budget. With decreased fares this could be offset by increased funding from the state or, for Boston residents, the city could move to reduce costs. People’s lives and futures are in the hands of you, the people with the ability to make change. Use this power wisely.