K-Pop is so much better than American pop 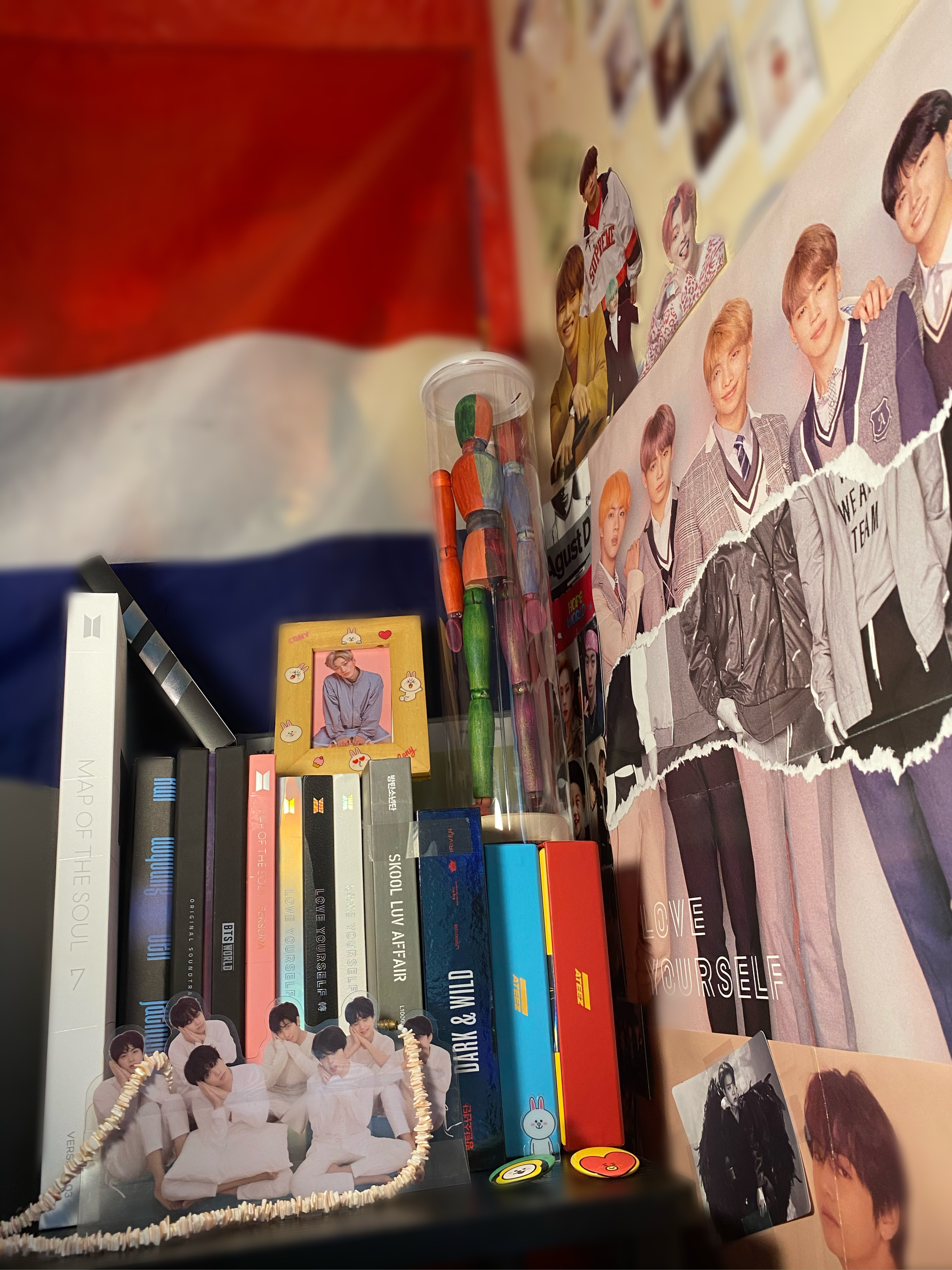 Some of Oller's k-pop photos and posters, including a BTS "Love Yourself" poster. Photo courtesy of Jersey Oller.

K-pop. It's everywhere in the media nowadays. Especially with BTS, the most influential group when speaking on the subject of k-pop and its global reach over the years. Let me start by explaining what k-pop exactly is. K-pop is a genre of music from South Korea that takes its influence from music and fashion belonging to cultures all over the world.

K-pop is far better than American pop music. The quality of music that k-pop artists produce is just insane compared to American pop artists' music. K-pop groups and solo k-pop artists also come out with more content than American artists, producing at least two albums a year. In a video by YouTube user K-FanMan explaining why they prefer k-pop artists to American pop artists, they talked about how American artists only drop one album a year, and if it does well, artists won’t drop another one for a while unless they are featured on another artist's song. To contrast, BTS drops new albums constantly, livestream themselves for their loyal fans (called ARMY) on the platform VLive, are always dropping behind the scenes videos on their channel, and constantly post pictures on Twitter. It’s crazy how much content they put out, but k-pop fans are never bored (especially if you are a “multi,” which means you stan more than one k-pop group). The only downside to being a multi? We are always broke from buying new albums.

Speaking of albums, another reason why k-pop is superior to American pop is because of the quality of their albums. K-pop albums are reasonably priced for what they come with. For $20-27, you not only get a CD full of new tracks, but you get a random photocard of a member, a photo book, and usually some stickers. There are different variations to what an album can come with but you will always get a photocard. There are even different versions of albums with different photos and concepts.

Another way in which k-pop is better than American pop? The concerts. K-pop concerts are a full-day event for k-pop fans. We get to the venue in the early morning (between 7 and 9 AM) because there will be people and things to do already. Usually, there is concert staff there giving away freebies like stickers and photo cards, selling snacks, and of course, the long-dreaded merch line. Depending on the group, there might be photo booth stations and other cool things for fans to explore while waiting for the concert to start. At around 7pm is when people go in and start heading to their seats and get ready for the concert to start. In an article for Her Campus called What to Expect at a K-Pop Concert, Kelly Banh said “Forget the phone flashlights … Each group has their own fan light with a specific colour… that fans hold up during the entirety of the live show.” This is probably one of the best parts of the concerts, especially because each group's lightstick is so unique. When the concert starts, there are also no opening acts. The group will start off with their most popular hits right away to get the crowd going. While the idols are singing and dancing, the fans lead fan chants where they all chant the group members' names at the same time and emphasize certain lyrics in the song. You can listen to a BTS fan chant yourself here.

Some people might not find k-pop to be for them music-wise, and that's completely okay. Some people even think the k-pop industry is just too strict. For example, k-pop idols have to train for at least two years under an entertainment company before they are even considered to debut in a group. Those years of training don’t include the many years they train in dance and singing academies, usually in their early teens. Some idols have even trained for over ten years before debuting. Another criticism people outside of Korea have about k-pop is that it pushes unhealthy beauty standards onto idols. In a Vice article from 2016, Justin Heifetz quoted former YG entertainment company idol trainer Kim Min-Seok saying, “If a girl has a bad face and a good body, the problem can be fixed with plastic surgery.” Though some time has passed since the article got published, Kim’s quote about female idols reflects a cultural idea that women and girls are more successful if they look good. In Korea, looking good is seen as being able to take care of yourself. So, this really isn’t a k-pop issue, per se. People also like to say that they can’t understand k-pop so they don’t like it, but I’m sure they were dancing to “Gangnam Style” in 2013 and “Despacito” last year. Neither of these songs was in English. Oftentimes, people really don't really have an excuse to hate k-pop though without somehow being racist, ignorant, or just plain xenophobic.

Some people also criticize k-pop for being an intense industry that can affect idols’ mental health. In an article for the South China Morning Post about the suicide of Kim Jonghun, lead singer of the k-pop group SHINee, Yonden Lhatoo wrote, “The circumstances of the 27-year-old pop idol’s tragic death have put the spotlight on the sheer pressures and shameful exploitation that young people like him in the entertainment industry have to face.” Kim sadly struggled with depression in his career, though Lhatoo is trying to make it seem as if the k-pop industry caused Kim's death because of the pressure and spotlight he had. However, idol trainees already know of the commitment and responsibilities they have to deal with when becoming a k-pop idol, and years of training prepare them for this. Suicide, regardless of affecting k-pop idols, is a mental health issue, not an industry issue. The k-pop industry has responded as well by being more open about these taboo topics and trying to make sure that performers get the mental health breaks they need.

Long story short: k-pop is way better than American pop music. The content that k-pop groups produce lets fans be able to get to know each of the members more. The production quality of k-pop music videos is similar to most movies, like this one. You don't see many American artists with music videos like this. Also, lots of big groups have a storyline or a concept throughout their music videos, their teasers, and even in their lyrics. Personally, I'm not good at figuring out theories so I leave it to the others on Twitter to let me know what's going on. Another cute thing about k-pop is that each group’s fan base has a unique name, like BTS ARMY. Being a part of a unique fandom makes you feel a little bit more closer to the group. Being a k-pop fan means you will never be bored.