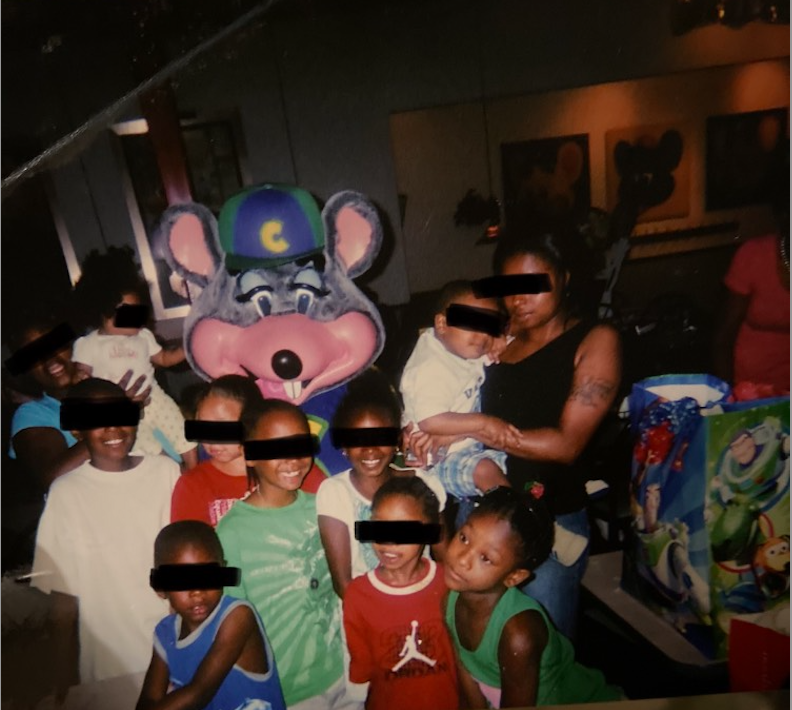 My mom enjoyed her niece's character and the fact she wasn't childish though she was only a year older than me. At this age I was still playing with dolls and watching cartoon networks about the grim adventures of Billy and Mandy. I stopped this immediately. Started asking to have friends over, started dressing and acting a tad bit more serious and focusing on my personal looks. None of these changes I cared to make before my cousin started getting attention from my mom.

My struggles with my identity began early in life. All of my cousins who I was around on a daily basis had something they were good at. Me? I had nothing. Yes, I would draw here and there but it wasn’t good enough to get any recognition. Once I realized all I had in me were a few good laughs because I was naturally goofy, I picked up a speciality in pretending. I wanted to be recognized and wanted, I was ready to fit in and didn’t want to be the odd one out all the time.

Middle came, and I instantly pulled friends with my natural humor but it wasn’t enough to hold. I had to be a spitting image of what they were. Sitting in class my friends were way more girlier than me, wore fitted clothing and had some sassiness. None of these things I cared about before realizing they got attention from it. I already perfected the persona they had previously because it was very close to my mom's niece so I just had to look like them. Which was a struggle because I was living in a “slim thick” era, thank you Fetty Wap. I stacked leggings under my pants, got more fitting shirts and dropped the Disney channel.

Thinking high school would be a breeze, my first day was actually brutal. I came to class on the first day assuming I would make friends because I have perfected the act of being someone else so people could like me, but actually I was spending time sitting quietly all day. I was observing my peers around me, seeing who was the most popular and how I could copy them. Things were… DIFFERENT. Everyone was unique. There is no physical way I could balance everyone’s personalities, what they like, didn’t like, and what they wore. So I kept to myself.

A few months into freshman year I made a couple friends and throughout the years of high school. Again, off of the strength of my natural personality, not all of my personality of course because all I really did was crack jokes and agreed to whatever was going on in the friend group.

Then quarantine came, the pressure of being like my mom’s niece somehow slithered away and trying to change to fit in with my friends no longer had any effect. Mom developed her own problem and didn’t pay attention to her niece that much any more and my friends no matter what I did to have an active friendship nothing worked. I still felt out of the loop. I was lost and didn’t know who to be or who to turn to.

A few months into quarantine, the feeling of being lost pushed me into a deep state of depression. I was sleeping all day, ignoring calls, overthinking, staying up all night, and watching tv. I didn't really want any human interaction. I didn’t know how to act or just be. I wanted my own identity so badly but I was at the point where I felt like it was too late to form one.

Around April 2021, I finally talked to a therapist, suggested by a boyfriend and grandmother and the sessions were very effective. I have been to therapy before and didn’t like it but this time around I was thankful for it. I was able to explain all of this to my therapist and she knew all the right things to say and ways to help me. I was already diagnosed with anxiety at the age of 11. Now I'm 17 and diagnosed with depression alongside my anxiety, which was slowly adding social anxiety. All because I wanted to be accepted and fit in. I’m so happy and grateful that I'm getting better now and learning myself to soon develop an identity of my own and I can't wait until it’s completed.