How can school be better for teachers and students? 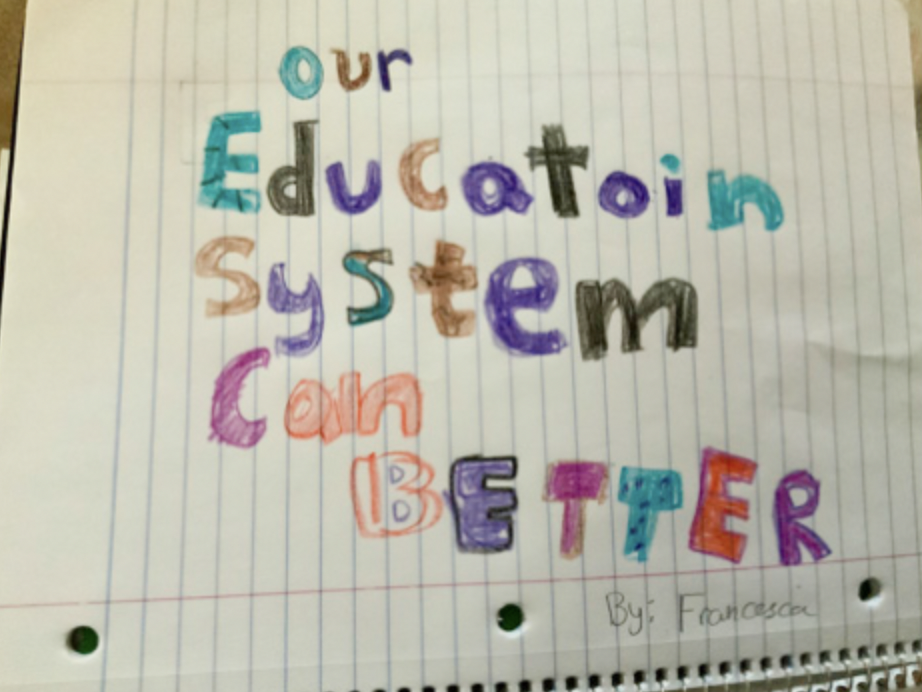 Image of a message written in multicolor, "Our education system can [be] better." Photo courtesy of author, Francesca Attis.

Have you ever thought about how we can make the education system better for teachers and students? Well, I have, and I think that the school system is broken. It can only be fixed if we work together and acknowledge our faults. Improving education will help students, teachers, and policymakers.

The first reason why I think that school can be better for students is that the school system needs work and it needs more student feedback.

A 2019 article in The New York Times by The Learning Network called “What Students Are Saying About How to Improve American Education” states that “We asked students to weigh in on these findings and to tell us their suggestions for how they would improve the American education system.” The article also states, “Our prompt received nearly 300 comments. This was a subject that many teenagers were passionate about. They offered a variety of suggestions on how they felt schools could be improved to better teach and prepare students for life after graduation.” This indicates that many students want to give feedback on what helps them learn, but they are not given the opportunity to. Student feedback would help us better the American school system, but what else will?

Another reason why I think that the school system is broken is that teachers get paid less than they should. In the 2019 New York Times article “How Do You Think American Education Could Be Improved?" a young lady named Marry from Baltimore stated that if teachers were better paid, “we would raise and draw more and better-qualified people into teaching.” Professional athletes and actors earn more money and respect than teachers and other public servants, she added. I think this proves my point that teachers need to be paid more and also need more respect because they are doing a big job. They also help us to become better in the future. Like for example, D.C. lawyer Ana Reyes tells the Washington Post how her 1st-grade teacher thought her how to speak English after she immigrated to the united states at 5. “I remember feeling lost,” said Reyes, 46, who was born in Uruguay and shortly after moved to Spain. She and her family packed up their lives and flew to Louisville in 1979 for her father’s job as a civil engineer.

She was adrift until she got an unexpected offer: Reyes’s first-grade teacher would arrive at school an hour early every morning for a one-on-one lesson to teach her English. She herself says without that teacher pushing her and helping her learn English she would’ve had a much harder time adapting and learning. She would also be really far behind.

The last of my many reasons why I think the school system is broken is that it lacks mental health help. In a 2018 article “Our education system is screwed up" written by Xine Way, an artist thinks and feels out loud, Way states that “You know how there are typically 'sick days' and times when people are allowed to ask for excused absences due to physical reasons? Like a doctor’s appointment or surgery or an X-ray. There’s no equivalent for mental health. If a child is depressed (or even suicidal), there’s no process for them to go through.” I think she is right because I have never heard of a process that a child, teacher or parent can go through if they are having such issues. I think that if we added more mental health it would really benefit some students, and help them learn and work faster.

I think that if we have more student feedback, raise teacher’s pay, and offer more mental support we can take to make the American school better for teachers and students and we can make a more fun, safe and happy environment. What else do you think that we can do to make your teaching and learning experience better?

About the author: Francesca Attis is a student at Boston Latin Academy. She currently lives in Roslindale, MA. She enjoys taking walks at night. She loves to listen to music and take care of her sister.