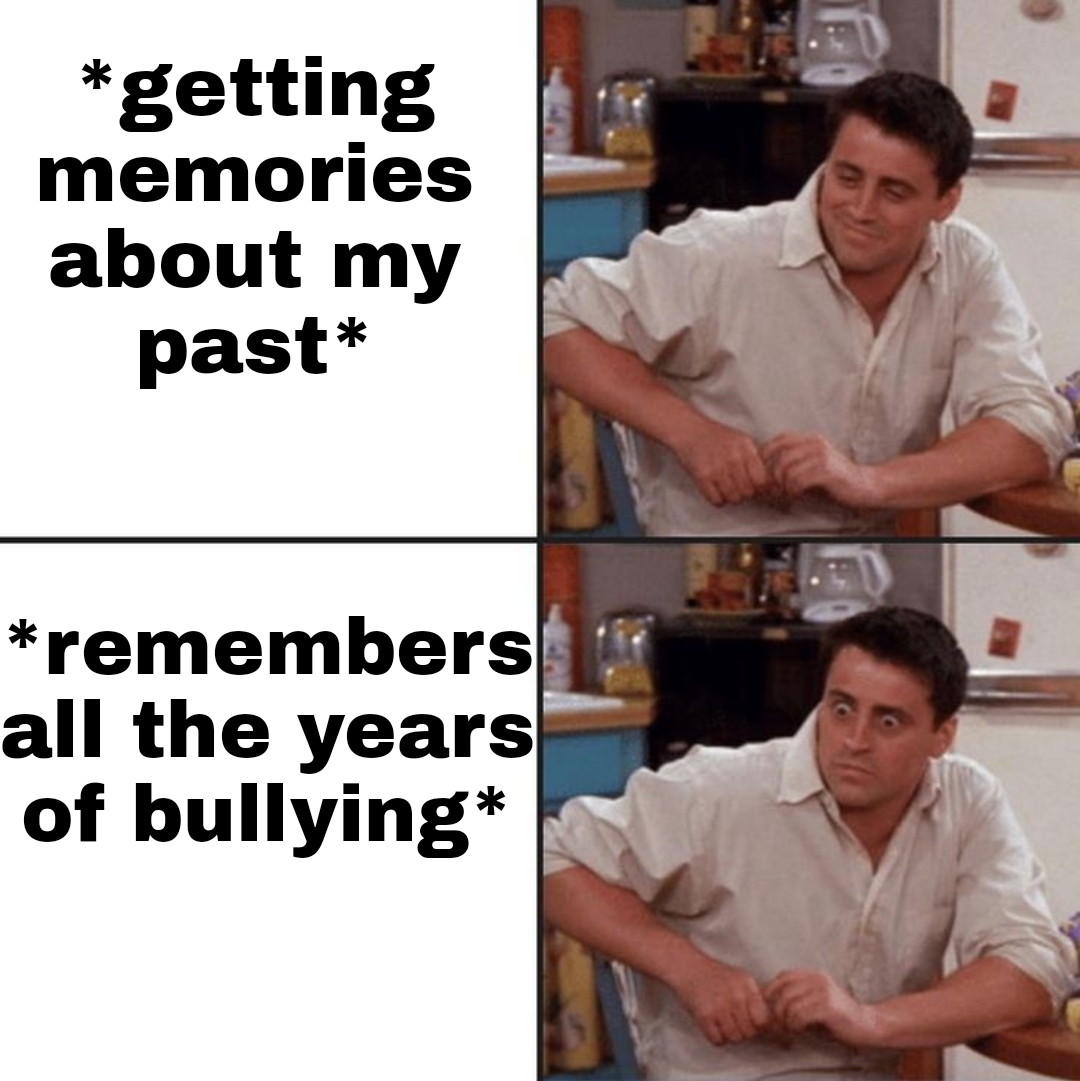 Meme of Joey Tribiani from "Friends." Meme created by the author.

I believe in life you are given an empty glass. By first grade, this glass of mine was empty. I was happy. Nothing made my emotions overflow. That time in my life was one of my happiest moments. This was of course, until that one day. My classmates and I started learning about adjectives. The class was fairly quiet considering it was filled with a big group of 6-year-olds. For us to understand, the teacher decided to use us as examples. Knowing my luck I was one of the first she started to describe. “Jenny is slim,” The teacher wrote underlining the word “slim.” She then went to me. I was somewhat excited. I don’t understand why. Maybe it was because I wanted to see how someone would describe me. “Shaniece is fat,” my teacher said. My face fell. I heard laughter fill the room. I started thinking to myself, “Is that the only thing people thought of me?”  I ended up shrugging it off but I still felt self-conscious. A person in first grade doesn’t think too much about it because they are a child. A person in first grade thinks about the positives, but the older you get the meaning of certain things starts to change. The word fat started to hurt as I got older.

When I was younger I wasn’t exactly small. I stuck out in a crowd compared to my classmates. You can simply say that I was fat and my classmates didn’t make it any better. Kids can be very mean no matter if they look like angels.  So, at a young age, I began to get bullied. My self-esteem shot down. I didn’t say anything to anyone. Being a burden was the last thing I wanted. When you are told that you aren’t good enough you end up starting to believe it. It is hard to reverse what you grow up hearing. I had positivity from my Mom (believe me I did), but I spent most of my time in school.  So, I spent most of my time being surrounded by people who only spoke negatively of me.

By the fourth grade, my glass was almost full.  I had so many emotions pouring out of me during this time. I was almost at my limit. The bullying never stopped since that event in the first grade. To be honest it only got worse. It was one Thursday afternoon that I ended up learning a hard lesson. I was in a small classroom with purple walls and on those walls, posters hung for all to see. That day we had our physical education class. This meant I had to change into my gym clothes. It was fourth grade, I felt so self-conscious about the way I looked. I was told that how I looked wasn’t enough so of course, that made my confidence level low. Once I got back from changing I saw girls whispering all while looking at me.  They didn’t even know how to whisper. “She’s so fat she looks pregnant.” I felt more water pour into my cup. That was my last straw. I was now overflowing with so many negative emotions towards myself. It felt as if someone just stabbed me right then and there. I felt as if I needed to do something about how I looked. “ You need to stop eating, that will make you lose weight,” I thought to myself. They might have not known then but words can be the most deadly weapon.

By the sixth grade, my cup had lost a bit of water. It wasn’t much but I still felt better than how I did in fourth grade. It was the first day back to school. I was so proud of myself. I had managed to lose some weight. You could say I felt somewhat “happy and healthy.” I don’t know what I was expecting but I didn’t think they could throw those names I hated around anymore. My mind flooded with the memories of those stupid words. “Pig! Cow!” the words repeated in my mind. I took a deep breath and walked into the classroom. I was met by stares. Those same stares that I had always despised. Someone finally spoke up. “You should put some weight on. It looks better on you,” they said to me with a straight face. I was completely lost. I stared into space trying to comprehend what they had just said to me. I worked so hard to get where I was now, and they still found a way to degrade me. It finally hit me that it would never be enough for some people no matter what I tried. I let it sink for a bit. I started to feel relieved. I felt some of the water that had been flowing over in that cup of mine finally come out. It didn’t spill over like in the past. It just poured out which gave me peace. I learned that you have to do things because you want to do them. You have to do things that make you happy.

I don’t blame them for bullying me based on my appearance. They were children after all, just saying whatever they heard an adult or even the media say. I blame the adults, like my teacher who started it in the first place. It honestly sucked and that experience had a huge impact on me. I feel like society sets unrealistic beauty standards for people. People don’t know that you can be any shape or size and still be beautiful/handsome/attractive. You grow up with images that are supposed to be one size fits all but in the real world there are so many different shapes and sizes people fit into but we only see one size in media.

I’m still trying to rebuild the confidence I don’t remember having. I’m still trying to repair my mental health. So, even though it is in the past, it still has a massive effect on my life. I’ve been trying to grow since then. I’ve taken up new hobbies. I’ve taken up astrology, crystals, and other fun stuff. Things that make me happy. I’ve also started to appreciate things that I’m already good at. Just knowing and understanding yourself helps you with your growth into finding confidence. It’s completely okay to not “fit in” when growing up, just stay true to yourself.