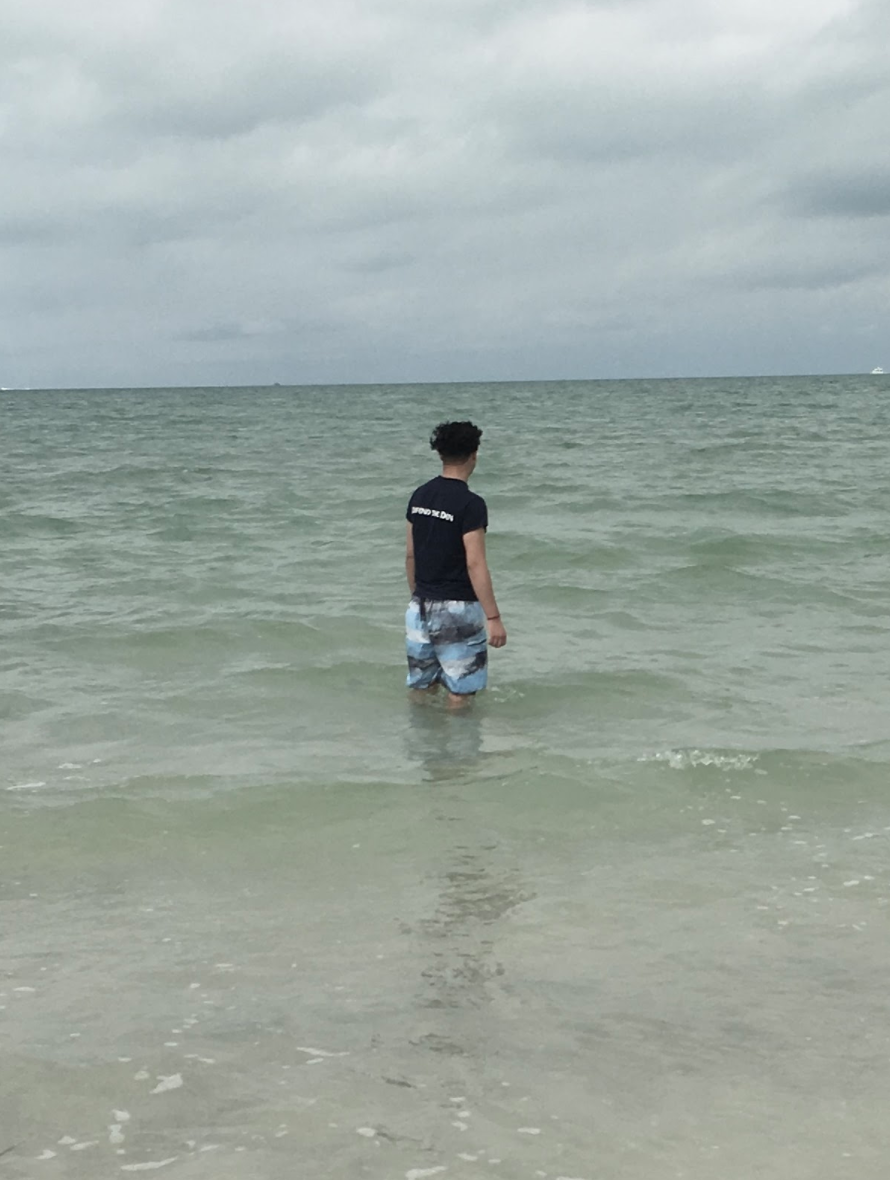 A person standing knee-deep in the ocean. Photo courtesy of the author.

“Foster boy” was the last phrase I heard before my vision went red, and my fist connected with a satisfying crack against the face of my bully. The satisfaction quickly turned to pain after he responded with his own fist. A hall monitor had to pry us off each other. Blood dripped from my nose and my eye immediately started to swell. I quickly realized that what I’d done was wrong, but that phrase, in my mind, justified my response. We were both dragged to the front office, and made to sit across from each other. The smell of warm paper stung my nose, and the steady noise from the printer calmed my pounding heart. “Foster boy,” I thought to myself. If only he knew how deep those words cut. They transported me to that day my life permanently changed.

The boy sits in silence as a lady in a blazer talks to his Titi and Tio. Cops came the night before and removed his mother from the house. His older brothers tried to stop the cop, and got slammed into the ground as a result. The boy froze, not knowing what to do, and stared as his mother was taken away. Her disheveled clothes and drug-addled eyes stared back at him. The lady in the blazer finishes her talk with the adults and turns to the boy. “Get your shoes,” she orders. The boy stands still, not understanding, and turns to his Aunt. She looks him in the eye and says kindly, “Ponte los zapatos por favor Raphy.” He does. He won’t see his family for years after that day.

I was born Josiah Fuentes Medero, but I became Josiah Ramirez Evans after I got adopted seven years later. Foster care would be the most difficult seven years I faced in this world. The constant abuse I was put through hardened my exterior. They put kids in foster care to protect them, but never realize they’re only trading one hell for another. I entered the system when I was three years old. Growing up separated from my siblings was extremely hard for me, and I had to learn to take care of myself. I was one of five other kids, and I wouldn’t see my older brother and sister until I turned nine. Anger and rage were easy emotions to turn to at my age. It felt better to be angry than to feel the loss, and sadness every day. I used to get into fights just cause I could, and it took my mind off of the empty feeling in my chest. This anger of mine was reckless, and I tried my best to push people away so I’d never feel that pain of separation again. Most people foster to get a check. My moms were the first real people who actually tried to get to know me.

I refused to acknowledge my feelings because I had been told by my father that a real man didn’t feel emotions. I remember visiting him when I was a kid, and crying when I had to leave him again. His words to me were “Push it down and forget your hurt. That’s what a man does.” I took those words to heart and tried my best to replace my sadness with anger.

My recklessness followed me throughout my childhood and into my teenage years. By then, fights were a regular thing. I hated the looks of disappointment from my moms, and I tried my best to be good. I was just too angry. It wasn’t until I met my dean for the first time, way back in middle school, after that very fight, that I found I wasn’t alone. She always gave me that look whenever I got in fights, and she made me realize that I wasn’t the only one who lived with trauma and pain. She took the time to talk to me every day, and to really understand the pain I went through. She was the one who told me that it was okay to cry. She explained how seeking help wasn’t a weakness, but a skill that more people needed to learn. I realized the only person I was harming was myself. So I got help, and used the school’s resources to talk about trauma.

I’m not gonna lie, at times I was bored out of my mind because there was nothing weirder than having nothing to talk about and just staring off into space, but I stuck with it because I knew I wanted to be more, and I turned myself around. Recently my youngest brother has been going through some pain himself. I’m gonna be what my dean was for me. A role model. A shoulder to cry on. A voice of reason to cut through his own pain. I’ll tell him it’s not his fault — that it’s okay to cry and be angry. I’d help him heal. I’ll explain that the pain never goes away, but that it's our job to control it and use it to better ourselves.

Had I never forgiven my birth parents, I would have torn myself apart. Had I not forgiven myself, I’d still be that angry boy who BURNED on the inside. Foster care gave me part of my pain, but it taught me to survive an uncaring world. My moms taught me to be human. I learned to be self-aware and called people on their bullshit because I know what it’s like to hate for no reason at all, and to be angry at the world who kept spinning while I was in pain. The phrase “Foster boy” is no longer an insult, but a badge of survival. I made the decision to change for the better. Foster care may have ruined my childhood, but I get to decide my course in life. I choose to be happy. I may have my rough days, and COVID is really kicking my ass, but the point is I choose how bad situations can affect my life. I choose to be better.