Felony disenfranchisement must come to an end 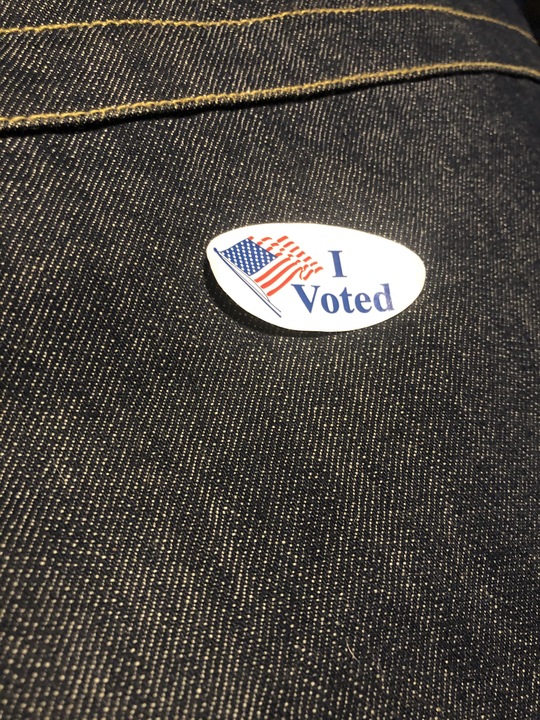 An "I Voted" sticker on denim. Photo courtesy of the author.

In 12 states throughout the country, felons lose their right to vote from prison, during parole and probation — even after fulfilling their sentence. This means someone could go to prison for a minor crime and never be able to vote again. Taking away someone’s voice because they have committed a crime is not okay. Felons should maintain the right to vote during and after their prison sentences and should be made aware of their rights throughout each phase of their incarceration.

Felon disenfranchisement is the practice of barring those who have been convicted of felony crimes from voting in political elections. According to The Sentencing Project, a group that advocates for criminal-justice reform, “Maine and Vermont remain the only states that allow persons in prison to vote. Thirty U.S. states deny voting rights to felony probationers, and thirty-four states disenfranchise parolees. In the most extreme cases, twelve states continue to deny voting rights to some or all of the individuals who have successfully fulfilled their prison, parole, or probation sentences.”

Prison is supposed to be about rehabilitation into society. Many Americans have forgotten that this is the goal. When we think of an American prison, we think of barbed wire surrounding the courtyards and disgusting food. In other countries, such as Sweden, prisoners live in much better conditions and can earn privileges based on their actions. If prison is about rehabilitation, it should be modeled to look like society. If prisoners feel like they are a part of a community in which they are productive members, then their behavior will improve. This includes being able to vote. If prisoners can vote in prison, they will be more likely to go out and vote once they have finished their sentences. In voting, they will show that they can be productive members of society, and they will also be able to voice their opinions, which would otherwise have been silenced.

It is very important that felons are able to vote and voice their opinions, because they may feel that the crime they committed wasn’t a good reason to be sent to prison. Our elected leaders determine the laws of the land, and the laws of the land determine which acts result in prison sentences. Committing a felony shouldn’t take away your ability to elect leaders that you trust to draft equitable laws. This can also have a major effect on the outcome of elections. In the 2016 election, it was estimated that 6.1 million Americans were not able to vote because they had a felony conviction, according to The Sentencing Project. Who knows if this could have affected the outcome of the election in swing states such as Florida or Pennsylvania?

One might think it could be dangerous to give people with a criminal record the right to vote. However, in prison, the goal is to improve behavior to the point where they can re-enter society. If this is the case, then it is essential that felons are able to vote and have their opinions expressed. Also, once felons leave the criminal justice system, they face all of the responsibilities of any other citizen: They must pay taxes, abide by the law, support themselves and their families, and behave as anyone else would. If that is the case, then why are we taking away their right to vote?

People in prison are supposed to be rehabilitated so that they are fit to live in society. They cannot do this if they are unable to vote. The federal government should rule that felony disenfranchisement is unconstitutional and that all citizens should be able to vote, whether they are in prison or not. Our country prides itself on being a democracy, yet we disenfranchise roughly six million citizens each year. Until felons are able to vote, we do not live in a true democracy.