BTS in the West 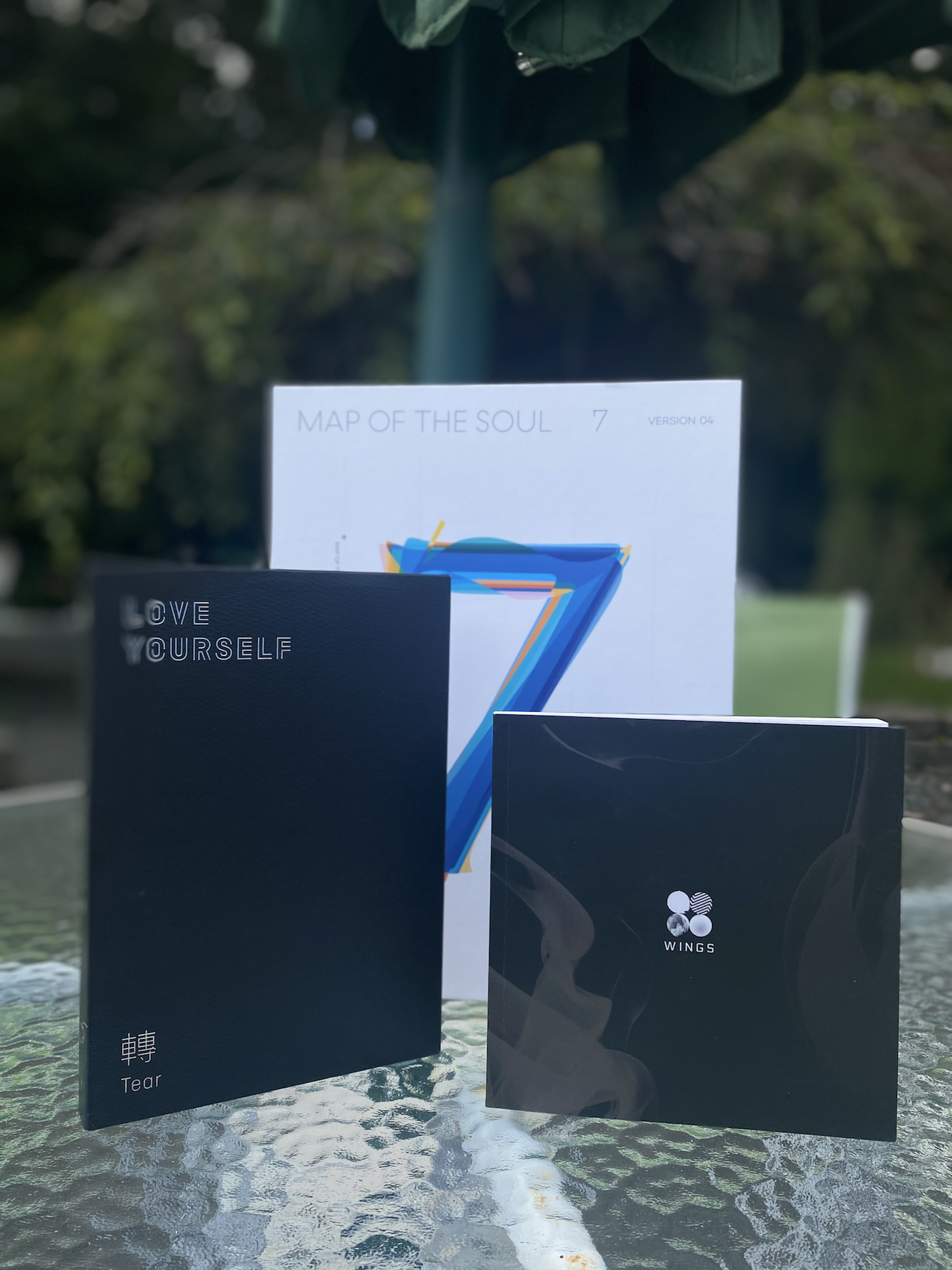 Three BTS albums, "Love Yourself: Tear," "Map of the Soul: 7" and "Wings" stand on a table. Photo courtesy of Bendu David.

It’s November 2018 and you’re at the movie theatre to see “Fantastic Beasts: The Crimes of Grindelwald.” As you’re walking to your showroom, popcorn in hand, you see a line leading into a different showroom with the display reading, “Burn The Stage: The Movie.” Still confused as to why the line’s so long, you ask someone what they’re queued up for. “BTS’ first musical documentary film!” you’re told. You’ve heard of the group but can’t help to think to yourself, “all this for BTS?”

Fast-forward to 2020 and “Burn the Stage: The Movie” has broken the record for the highest-grossing event cinema concert production. The movie saw 1.4 million admissions worldwide, accounting for $14 million in global ticket sales and $3.6 million in North America during its three-day weekend premiere. In 2019, their “Bring The Soul,” movie accumulated $4.5 million in the U.S., taking the No. 10 spot in the box office during its opening weekend. Both movies document two of the group’s world tours — the 2018 film documenting their 2017 “The Wings Tour,” which drew over half a million attendees in 12 countries around the world, and the 2019 film documenting their 2018 “Love Yourself World Tour,” which received over a million attendees. A stadium extension of the tour entitled “BTS World Tour Love Yourself: Speak Yourself” sold out completely, becoming the group’s most successful tour to date and the highest-grossing tour by an act primarily performing in a non-English language, as reported by Billboard.

So yes, all this for BTS.

BTS, which stands for “Beyond The Scene,” is one of the biggest acts in the world right now and has been since as early as 2017. The group achieved their fourth No. 1 album on the Billboard 200 chart with their recent “Map of the Soul: 7,” an accomplishment their third No. 1 album, “Map of the Soul: Persona,” took from The Beatles. “7” also had the biggest U.S. debut of 2020 upon its release. They have over 8 billion streams on Spotify, their videos have millions of views on Youtube, and their most recent US stadium tour, “Love Yourself: Speak Yourself,” outsold tours of the likes of Taylor Swift and Ariana Grande. So why don’t we hear them play on the radio alongside these two artists? Why isn’t their music and success widely talked about?

Earlier this month, BTS’s track “Black Swan” broke the iTunes record for reaching No. 1 in more countries than any track before. The song reached No. 1 in 103 countries, a record previously held by Adele’s “Hello.” This achievement did not make major headlines.

BTS is statistically doing better than their peers in the West but is not treated or regarded in the same light as Western artists due to xenophobia and the Western industry ultimately viewing them as a threat. Xenophobia refers to the dislike of or prejudices against people from other countries.

With the release of “Map of the Soul: 7,” BTS launched “Connect BTS,” a global project that aimed to connect five cities and platform 22 artists. This project sought to showcase the relationships between art and music throughout the “7” era with releases such as a “Black Swan” art film performed by MN Dance Company and “‘ON’ Kinetic Manifesto Film: Come Prima” on YouTube. This project was not given its dues or the large media coverage it should have received as nothing like this has been seen before by a major artist.

BTS has proven their demand, achieving despite limited radio play and without bundles. The group’s “Map of the Soul: 7” album debuted at No. 1 on the Billboard 200, their fourth consecutive album to do so, and debuted with 422,000 album-equivalent units sold. The album also achieved 347,000 pure sales and had the best pure sales week for any album since Harry Styles’ “Fine Line.” Their title track, “ON,” became the highest-debuting Korean song in Hot 100 history, and the achievements still don’t stop there with this album or for this group.

Why radio continues to ignore BTS is a real question. In 2018 their album “Love Yourself: Answer” became the No. 1 album on the Billboard 200, yet even then they were absent from the radio and headlines. There's always the excuses of there being a language barrier and that BTS doesn’t have demand, but when you have artists like BTS making such an impact, not just in America but globally, it doesn’t make sense at all to continue excluding them.

Despite accomplishments and achievements dating back as early as 2015, for the past three years BTS has been asked some of the same questions during many interviews they’ve had in the West since their success with “DNA” off their “Love Yourself: Her” album. Some of these questions include “Who’s your favorite artist?” “Who’s your celebrity crush?” and “Who do you want to collaborate with?”. Then there's the, “Are you ever going to sing in English?” question that brings uproar from fans on social media. We can count the number of “good” interviews BTS has had in the West since 2017 on two hands, and that’s a problem. Only a handful of interviewers and journalists have asked them questions beyond the tired collaboration question or the over-asked favorite artist question, and it's always clear who does their research before speaking with them.

In their spread with Paper Magazine they were asked questions among the likes of “What’s the greatest challenge you’ve faced as a group, and how did you overcome it?” questions regarding whether the members feel pressured by global fame, questions about what they’ve been up to and what they would like to do musically in the future. When this spread dropped it was well-received on Twitter by the BTS fanbase known as “ARMY,” who appreciated how well-written the spread was because the background was thorough and informative and the questions sought to present more about who BTS was, how they thought and what their message of self-love meant.

So why isn’t a group this big, with so far of a reach, getting the proper coverage and treatment they should be?

The other side often claims that BTS members are not substantial artists and that the ways people treat them and regard them have nothing to do with xenophobia. The claims include that the group is a part of a manufactured, cookie-cutter industry that doesn't have the values or authenticity that the West upholds and praises. They also claim that BTS is “not popular enough,” and that their fan base consists of teenage girls who will move on from the group eventually. The argument of the group not being “popular enough," can easily be disproved if you look at the charts and numbers, or if you ask Drake.

During the 2019 Billboard Music Awards, Drake met with BTS backstage. Though the interaction was short, he acknowledged that the group was the biggest act in North America, recognized that he knew member J-Hope’s “#InMyFeelingsChallenge” made it into his music video, and told them that he would host them the next time they toured Toronto. So if Drake — one of the biggest acts out there — can acknowledge this, then why are there still people who claim the way people treat BTS has nothing to do with xenophobia and racism?

The fan base argument is misogynistic not only in assuming that the interests of teenage girls are feeble, and also is virtually incorrect. The BTS ARMY is one of the most diverse fan bases with ages ranging from elementary to those 35+, all coming from all around the world. However, the group is often negatively reduced to their fandom, which doesn’t seem to happen to other artists, and is constantly the butt of jokes. A Greek T.V. host earlier last year made fun of the group members’ physical appearances, and on an Australian news broadcast in June of last year, the hosts and guests joked about the group’s native language, mock their careers, and jokingly question if the guys were gay.

It’s as simple as showing respect and taking BTS seriously. When the group first broke into the U.S. they were described as a phenomenon and something out of this world. Up until 2018 they were treated as though they would only be one-hit wonders and then would never be heard of again. However, it’s clear BTS sits at the head seat of the table, and since have been met with passive-aggressive tones in articles from journalists, side comments from talk show hosts and genuine disbelief all around — people don’t understand why BTS is where they are because they don’t want them to be there.

This disrespect is evident in the way an article earlier this month referred to their success in the West as an “invasion.” There isn’t much the average person can do about this as xenophobia in the industry has gone on long before BTS, but the ARMY never falls short in making their voices heard as they call out journalists, radio stations, award shows and even the industry as a whole on their blatant xenophobia against the group. So many people are quick to think something stereotypical or even racist when they hear “BTS,” and to let biases and stereotypes build how you wholly think about an artist, so much so that you disregard their craft, is a problem.

To think the treatment of BTS in the West isn’t reflective of xenophobia is wrong as the radio and the industry time and again prove this to be true — and they don’t even try to hide it.