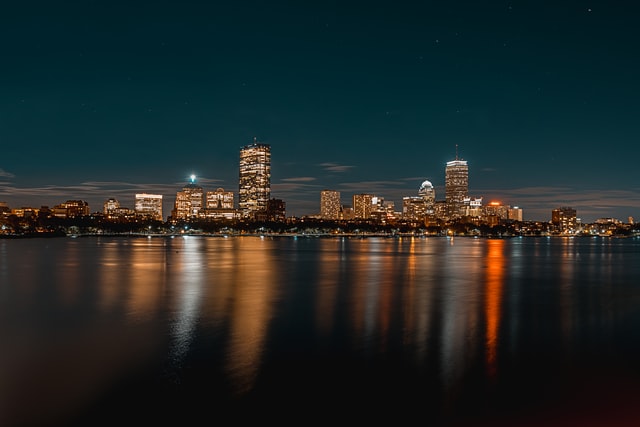 View of the Boston skyline's buildings lit up at night, reflecting on water. Photo courtesy of Osman Rana on Unsplash.

As the bricks and stones of the Harriet Tubman House in the South End laid in a pile of rubble, it became clear to many residents of Boston that gentrification is a runaway train with no conductor to stop it. Boston has been growing at an exponential rate with no sign of slowing down. The city has been changing before our very eyes for years now. Areas that 20 years ago were desolate, empty patches of land are now Yuppie hubs full of coffee shops, restaurants and expensive luxury condos.

Across the city, buildings that people saw immense cultural and historical value in are being torn down to make way for expensive condos for the rich. While being met with public outcry all over the city, the land developers remain undeterred in the face of human values. It is clear that  Boston is the third most gentrified city in the United States with 21.3% of Boston’s neighborhoods undergoing gentrification from 2013 to 2017, according to CBS Boston. The vast majority of the parts of the city that are experiencing this are inhabited by people of color.

Boston has a rich history when it comes to protests against the establishment. In the 1960s, residents of the South End’s Puerto Rican community banded together in protest to stop the city’s demolition of their neighborhood in order to build new expensive tenements. We are seeing the same today throughout the whole city. Private developers target areas in lower-income parts of the city, such as Roxbury, and seek to destroy the houses and neighborhoods of the people living there and replace those houses with shiny, modern and expensive condominiums for wealthy young urban professionals.

While times change, so do the methods people use to fight back. Instead of traditional forms of protest such as marching in the street or holding public forums, there has been an increase in attention to gentrification and its effects on social media. When the Harriet Tubman House was demolished, there was an outpouring of grief and support across social media. There are accounts on almost all popular platforms that solely bring attention to the city’s plans to gentrify it further and with ways to combat it, such as petitions and links for websites with more information. It may seem like in the streets there is little to no pushback, but where it matters these days, online, it is heating up.

The city government has begun to take drastic steps to combat the ever-growing issue of gentrification. “Looking at the gentrification issue from community issues and having close coordination with sister agencies,” is one way that the Boston Planning and Development Agency (BPDA) is tackling the issue, according to Bonnie McGilpin, director of communications for the BPDA. Housing development on the private market is driven by profit. Those who are affected by said profit do not matter to the heads of the developers. Extra steps within the BPDA are being made to address the displacement that new developments will cause. “Each application needs to address how they will combat displacement,” according to McGilpin. The BPDA knows that gentrification is a massive issue within the city, but there is only so much a government agency can do to help those who need it.

As citizen outrage grows and the corporate lust for profit and expansion grows with it, the tension in the city will rise to a boiling point that no one will be able to control. There is no easy answer for how to prevent this, but there will come a time when there is no preventing the chaos it could bring and has already brought. Rent continues to skyrocket all over the city, and homelessness is rampant, with nearly 6,000 people without shelter. Massachusetts is the state with the highest percentage increase in homelessness in the entire country since 2007!  It’s nearly impossible to walk anywhere without having to step over some poor soul trying to catch a wink of sleep on the dirty city sidewalk.

No person will take lying down to watch their neighborhood become destroyed and the place they grew up and were raised become a playground for greedheads and human jackals that inhabit the high-rise buildings they would be replaced with. The issue of gentrification will continue to sour the tongues of all those who speak of it. The solution is opaque, but the only way to solve issues within communities is with the communal protest and activism that we have seen from residents of this city for so long.