Boomers can learn from Gen Zers and Millennials 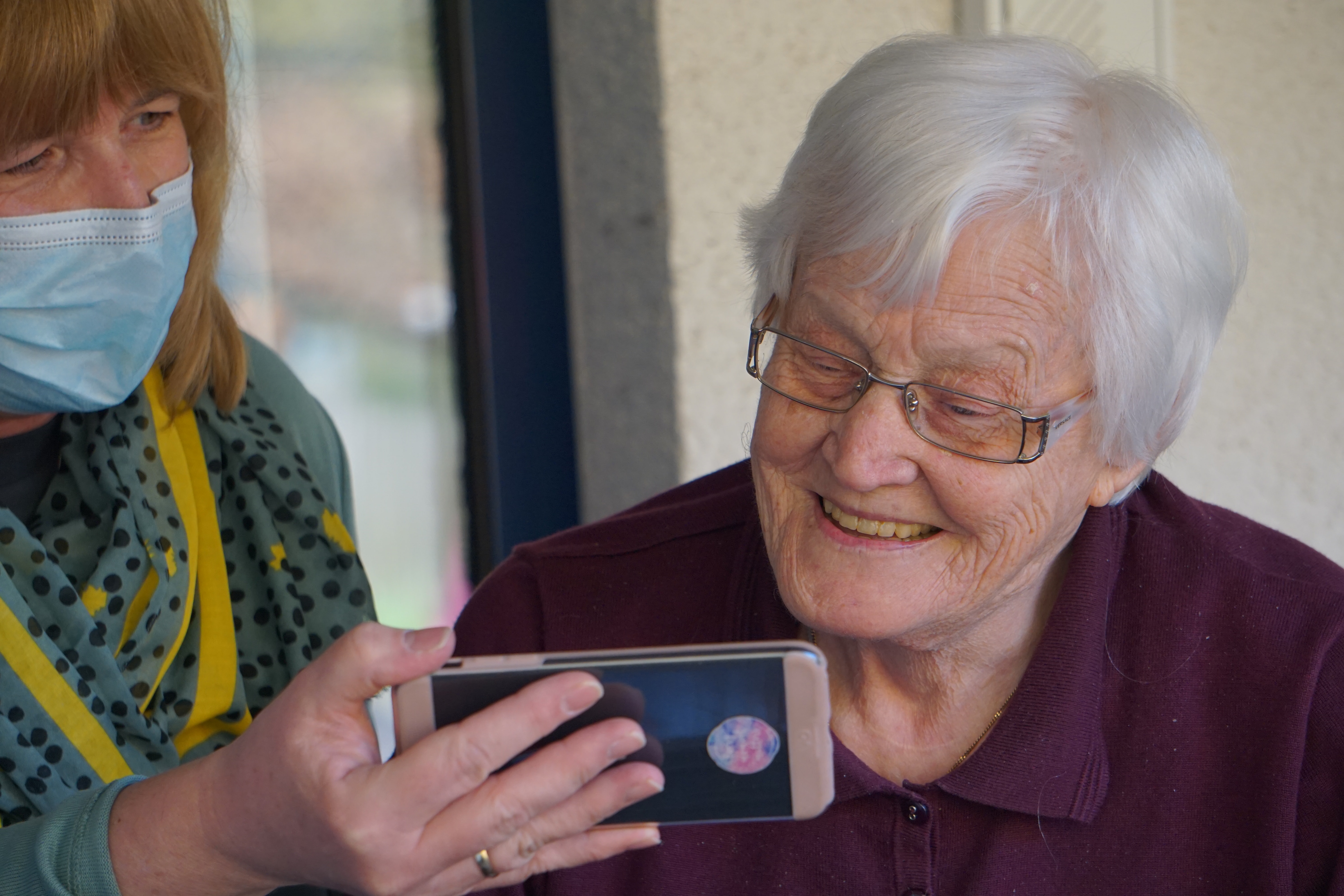 A masked woman shows another person something on her iPhone. Photo courtesy of Georg Arthur Pflueger on Unsplash.

It was a Saturday morning in November. I was at VietAid, a Vietnamese American community center in Dorchester. As part of the job, my colleagues and I had to attend an event that would later help contribute to what we were doing. The room was filled with empty tables and seats and a few people lingering around the room. There was a table that had trays lined up with food, all of them covered in plastic wrap.

Me and my colleague stood by the door leading to the room, deciding on whether or not it was time to go in.

One thing I started to realize was that the room was filled with much older people. There were no teens except for the table I sat at with my colleagues. There were barely any millennials. I thought to myself, What is this event supposed to be? I knew that it was called “Family Stories,” but what did that mean? Was I going to hear the same things I’m already hearing about in my family? Beliefs like “respect your elders” and “study hard in school to get a good job?” Because if so, I already hear enough of it.

The room started to fill up with people, and it was not much different. I thought I would have seen more families, middle-aged parents and their kids or maybe more millennials. But I didn’t.

The event started with a poet who read about coming out to his mom. I was captivated the whole time but also confused. Talking about anything related to the LGBTQ+ community with my family was completely unknown. I’m fine talking about it with friends, but with family, especially older relatives, I wouldn’t even think of it because I always knew what the discussion would be like. I looked around the room occasionally to see the faces of others. It was always quiet except for when someone’s phone would go off, but everyone was paying attention.

Later, there was a skit about a daughter that wanted to pursue a career in the arts instead of a medical degree. I feel like I’ve grown up hearing so much slander against jobs in the arts, because “You’ll never make money from it.” I was shocked that this skit was happening, because it was basically breaking down an all too common belief that older people have imposed on younger generations for years. But so many people in the room enjoyed it, watched and listened.

At the end of the event, there was a debrief where the hosts wanted someone from each table to share what they learned and how they were feeling. Whenever someone spoke, I would turn around in my chair to pay attention. An older man across the room said that he saw being gay as an illness that can be treated. I felt shocked because after hearing all these people talk about how they are happy to learn about our society I was starting to believe the older generation might not be so bad. It felt that my world got flipped around and all of this was for nothing.

Quickly, others stepped in to explain to him that what he was saying might have been a popular belief of his time, but that is not actually true, that being gay is not an illness.

It wasn’t the first time I had heard that. Many older folks don’t support the LGBTQ+ community, possibly because they grew up in an environment where it wasn’t socially accepted. I think it’s possible that many Boomers may be homophobic not because they are hateful old people, but because they just don’t understand what the LGBTQ+ community really is. The differences between Gen Z and Boomers lie primarily in the differences in societal norms at the time each generation was raised. Gen Z grew up with technology, President Barack Obama in office, and the legalization of gay marriage while we were in school. This is different from how Boomers grew up. Many Boomers never got the opportunity to learn about the LGBTQ+ community and only view it as something bad because that is what they are used to hearing

My parents immigrated from Vietnam to the United States. My family doesn’t really talk about the LGBTQ+ community. Older relatives might not really know much about what’s happening. For me, growing up, I didn’t learn about the LGBTQ+ community through my family. I mostly learned through the internet, whereas if my older relatives learned about it, it would be through their kids. With the lack of conversation or the lack of access to learn about what’s happening, I think that’s where the real gap lies with Gen Z and Boomers.

Even though what the older man said was wrong, maybe it was a good thing that he said it. Not only did it turn into a learning opportunity for him, but it was a moment where I learned something too. I always hear that it’s rude to correct older people and that you should know your place, but I’m happy someone younger than him stepped in. There are common sayings that go, “If you don’t like how things are, change it” and “Be the change you want to see in the world” and that’s not going to happen if I keep this idea that I shouldn’t correct someone who is older than me. The first step may be small, but it could have a huge impact later on. Maybe the man who got corrected will have a changed mindset and will share that with others who don’t support the LGBTQ+ community.

It may be true that older generations are more conservative and right-leaning and it is true that there are tons of differences between Gen Z and Boomers. But what I find to be true after that experience is that we should not just make fun of Boomers for not knowing how things are today, but rather, spend time to spark these uncomfortable dialogues as a way to create a bridge between the generations. Older people have different beliefs but some are willing to listen and learn, and that willingness should not be wasted.