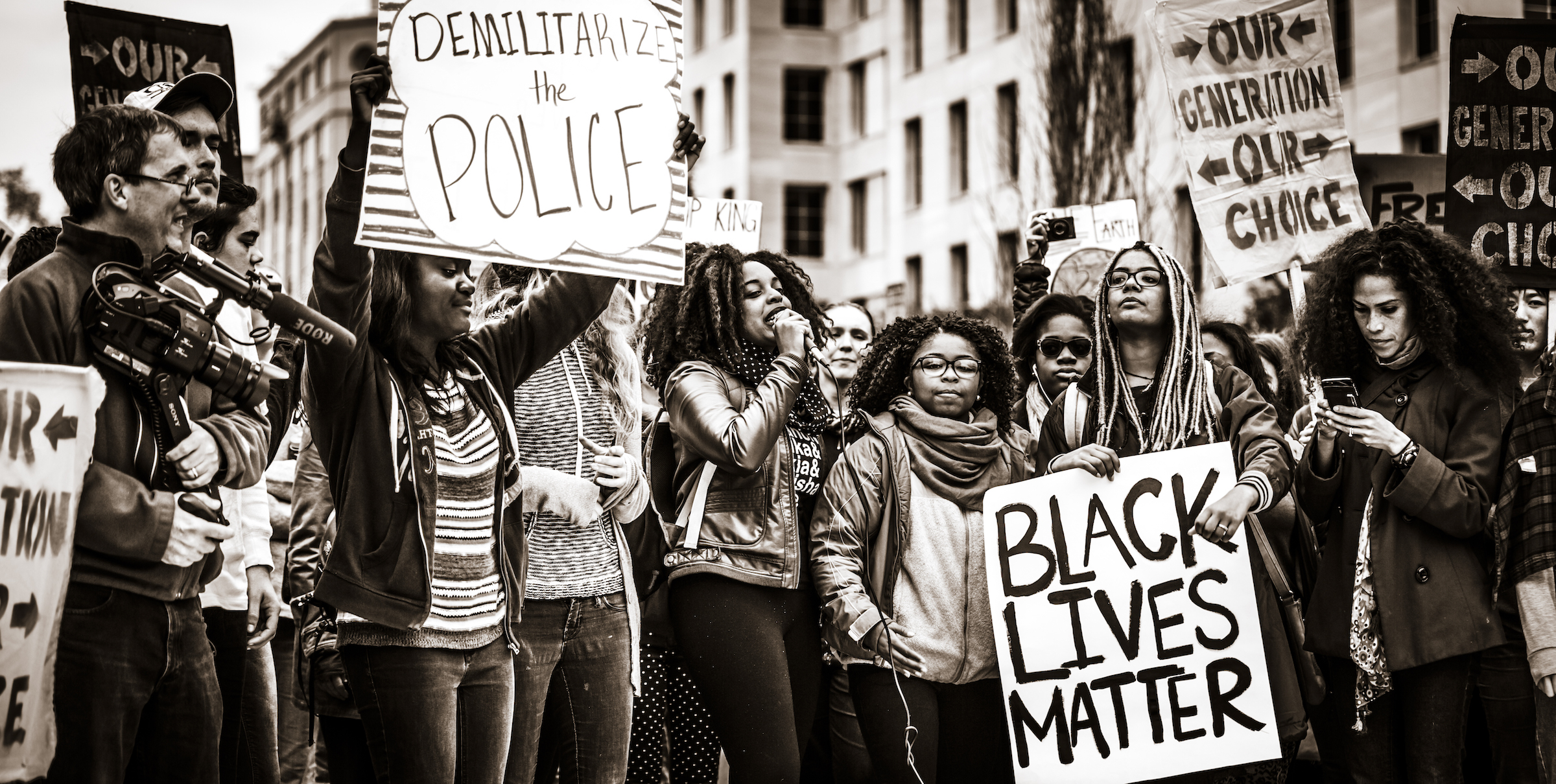 Black Lives Matter demonstrators at a protest hold signs in support of the cause. Photo courtesy of Johnny Silvercloud on Wikimedia Commons.

These days I think so much more than usual, I honestly think I’m gonna drive myself crazy … I think there's just so much happening in the world and the country at the same time, it's hard to keep up with everything.

We are all left to come to our own conclusions about what happens and what we think is true or not. Even when it comes to the news, when they report something it sounds robotic and just like every other news channel in the US.

I even saw this TikTok a while ago showing video clips from different new channels saying the exact things word for word. It honestly isn't hard to tell that the government tells them to talk about what they want. They just tell us what they want us to know and not the full story.

Especially nowadays with the political unrest. The police will hurt and kill innocent Black lives just because they know they have the power over them, and they are just plain racists. When George Floyd was murdered by the cops there was no initial punishment for them. It wasn't until people found out about what had happened and spread it around so it got a lot of attention and people protested that they decided to put the cop on trial and sentence him. We only found out through social media about this. News channels did not report on it because they are controlled by the government, and the government doesn't want us to know about the abuse of power, white privilege and systematic racism that goes on in our country every day.

During all the protests around the country, the news only showed the bad parts of them like the looting or rioting (which were caused by the police instigating protesters so they had an excuse to be violent towards them). They never showed the parts of the protests that were all peaceful. No one was trying to attack the police at first. The only way that myself and others found out that people were actually peacefully protesting was through videos that were spread around on Twitter. If it wasn't for Twitter I would have thought the whole country was rioting against the police.

I don’t trust the police anymore. I saw another story on Twitter not too long ago about a place in Milwaukee. It was known in the neighborhood that kids go missing all the time. This time it was two teenage girls that had gone missing, and they called the police to file a missing person report for both of them since they went missing on a Sunday and by Tuesday they were still missing. They refused to file it because they said they would probably show up soon. When after two days of someone being missing you're actually supposed to report them as missing. The neighborhood then took it upon themselves to look for the two girls. One of the girls' mothers received a ping from the girls' phone in a well-known pedophile house in the neighborhood. The house was reported to the police many, many times. The house has been involved in pedophile activity for more than ten years according to a resident who lived there his whole life. But anyways, the neighbors go knocking on the door of the house to try to see if the girls were there, but someone started shooting from the house at the people. When the police came all they did was knock on the door and since no one answered they just left. If it was in a white neighborhood we all know they would have busted down the doors and arrested them for firing shots at a large crowd, or if it was a white little girl that was reported at the house.

It just makes my blood boil because the police department knew about this house but it still stood there and no one was ever arrested. Some neighbors spent the night across the street in front of the house watching it to see if anyone went in or out. The next morning a neighbor said that they saw a red van behind the house and that a few kids were put in the van from the back door, and they drove away. They reported this to the police again, but they didn't show up at the house so some neighbors went around the area in their cars looking for the red van. Another part of the neighbors were still at the house and then the police finally showed up to the house at the back and were sneaking people from the house into a car. When the neighbors asked who the people were they said they couldn't give out that information because they were supposedly minors.

The neighbors then told them to search the house for evidence, but when they came out they either said they didn't care about evidence or that there wasn’t any – there are mixed stories about this part. When the police finally left. the neighbors broke into the house and found documents with a person's information on it and bloody boy's shorts in the white van in the back.  A few hours later, two unidentified people came and lit the house and white van that the shorts were found in on fire. The neighborhood still looked for the girls and tracked the van to a house that was known to be connected with the pedophile house, and they found the girls and a few other kids. The NEIGHBORS found the girls, not the police. None of this was reported on the news though, of course. It would have shown that the Milwaukee police department was protecting a pedophile house and ring, and was involved in it.

Police don't even do their jobs correctly. I really don’t get why we need them. They don’t know how to handle most of their 911 emergency calls. They’re in the academy for six months and learn how to protect people by the law when lawyers take eight years to study it. It doesn't add up. There are already organizations in place that know how to deal with all the things people call the police for. Crime? Crime watch organization. Mental health? Counselor and mental health groups. Hurt? Medical professionals and hospitals.

Soooooo in conclusion, I don't like or trust the police anymore. They aren’t needed.

ACAB and that's on period.

Especially this year with everything going on. Celebrating our country for being independent and “free” is the least of our concerns right now.

Today I saw so many of my white friends posting “happy fourth of July” on their Snapchat stories… the same people who were just a few days ago advocating that Black lives matter, signing petitions and supporting Black people. These posts at the beach and with food felt like a hard slap to the face.

These days there's nothing to really celebrate about our country. Women in the military who go to SERVE and FIGHT for THEIR country are often sexually assaulted but they can’t speak up about it.

The case of Vanessa Guillens proves it. She spoke up about being sexually assaulted by a male of higher position in the military, and sometime after she went missing. When they found her she was dismembered and covered in cement. When the police found the suspect who killed her, he had either shot himself or been shot – I can’t remember that part well. But now the police have no one to ask questions. One of her sisters or friends, I don't remember, reported Vanessa as missing, and a few days later the girl got into a car accident and died. Coincidence? I think not.

You won’t catch me celebrating the Fourth until Black people are treated right.