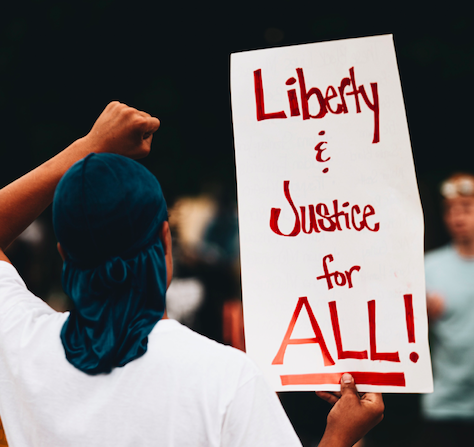 Protester holding sign saying, "Liberty and Justice for All." Photo courtesy of Logan Weaver via Unsplash.

It’s the beginning of the school year and you’ve just entered your United States history class. As you sit at your desk you’re given a piece of paper — a syllabus that details the topics that will be covered during the school year. You skim over the contents, Pre-Colonialism, Colonization, American Revolution, U.S. Presidents, Manifest Destiny, The Great Depression, World War I, World War II, Civil Rights Movement. You take a closer look at the Civil Rights Movement heading which directs you to look further down the syllabus and you see that it's being taught for a good two weeks right before break. As the school year goes on, you can’t help but notice that the same content being taught in 11th grade history is the same stuff you learned in previous years. The only thing that’s changed — depending on where you live — is that you now learn Columbus did not discover the New World. When it comes to Black History however, you realize it’s condensed to the teachings of slavery and the Civil Rights Movement, almost as if Black people don’t have history outside of these two periods.

You sit through yet another lesson about how Martin Luther King Jr. was against violence, therefore making him a better person than the oh so notorious Malcolm X who you’ve never learned much about aside from his “radicalism.” You learn about Rosa Parks and how she refused to give up her seat but as you speak to a friend from another state about how you’re feeling, you come to find that they are not aware that she refused to give up her seat at all. You come to find they aren’t aware of sectionalism, or of the bus boycotts that followed. You sit in front of your laptop and teach yourself things you were never taught in school. For example, MLK wasn’t against violent forms of resistance, Malcolm X’s views were only seen as radical because they didn’t appease white ears and Shirley Chisolm was the first African American woman to run for the presidency in a major party in 1972. You learn about the ways in which enslaved people carried on and kept faith and hope. You realize that what you’ve been learning in school is sanitized, greatly lacking in substance, and essentially inadequate information on Black history; and it has a name, the “Master Narrative.”

Now you’re left with one question: why is it that Black history is so condensed, sanitized and incorrectly taught in schools?

Black history is inadequately taught in American schools. This along with the “Master Narrative'' has resulted in a disconnect between the actual truth and what people believe to be true history. Ultimately creating an inaccurate understanding of Black history amongst Americans. This inadequacy further drives racial tensions and ignorance in this country. The “Master Narrative” in relation to the Civil Rights Movement and Black history, is a narrative that emphasizes the idea that Black people waited patiently for freedom and obtained it through nonviolent means. It’s the idea that there was a common desire to resolve conflict by working together with the oppressor. It instills that all there was to the Civil Rights Movement were peaceful protests and everything else was not as important. This narrative places a heavy emphasis on painting Black people in a light that doesn’t present them as “radical,” hence why MLK is taught to students in a different light than Malcolm X is or how for some time Rosa Parks was described as being a tired elderly woman on the bus when in actuality her refusing her seat was very intentional.

Many black educators feel as though the history being taught now, if not sanitized, is far too focused on violence and suffering rather than teaching issues like systematic and institutional racism or black political figures and their achievements. A clear example of this inadequacy is how Juneteenth is not taught at all in schools. This important day in 1865 marked the day enslaved people of Galveston, Texas were freed. Juneteenth marks the end of slavery in the United States, yet so many Americans are completely unaware of this at all.

LaGarrett King, director of Carter Center for K-12 Black History Education at the University of Missouri, said in an article for MySunCoast, “‘White people don’t acknowledge Juneteenth, but yet we’re supposed to be a country that believes in freedom. We have been taught July 4, 1776, is the real Independence Day, but it’s not. The vast majority of Black people were still enslaved.”

Furthermore, schools across the country are not covering important aspects of Black history such as that of the Black Panther Party, the Black Liberation Party, the Student Nonviolent Coordinating Committee (SNCC), the Southern Christian Leadership Conference (SCLC) and more. Curriculums either breeze past or don’t touch on who figures such as Stokely Carmichael, Ella Baker and John Lewis were or what they did; and many schools do not teach about who or what COINTELPRO was and their involvement in dismantling the Black Panther Party. The history we are taught in schools is sanitized to a worrisome extent.

The idea that there are a ton of history topics is true, there is a lot to cover and as someone who took AP U.S. History in high school, I know this to be true. Our end of year paper was about a topic we wish we had covered more extensively during the school year. I wrote about the Black Panther Party and how it compares today to the Black Lives Matter Movement. Upon doing my own research I found out so much information I hadn’t known before, information I had never been taught in school at the time and even now as a senior. Information that had only been touched on in one of the classes I took which happened to be an elective exclusively taught at my school. If there is “too much history” to teach then the only solution for this, and for all the other problems presented, is to create a national curriculum for U.S. history. This curriculum would be taught to teachers who would then — regardless of state and school district — teach it to their students. If teachers are not equipped to teach Black history, they should not be teaching at all.

The inadequacy with which Black history is taught in the U.S. and the sanitization of Black history is harmful to us. I want those reading this to leave with the understanding that even you are a victim of these inadequacies and have been taught lessons of the Master Narrative. I want for the reader to leave with the understanding that this is not okay and that something needs to be done about it. The lack of in-depth Black history taught in schools across the United States results in professionals in fields of health, business, politics and more, as well as leaders and government officials of this country, to be uneducated and ignorant to the history of the people they serve and the history of their own constituents. As we continue to see the ways in which this country continues to move, the lack of understanding and care for Black history will cause only more harm. Until a national curriculum is instituted or until states mandate that Black history be taught throughout the school year, we can only educate ourselves.