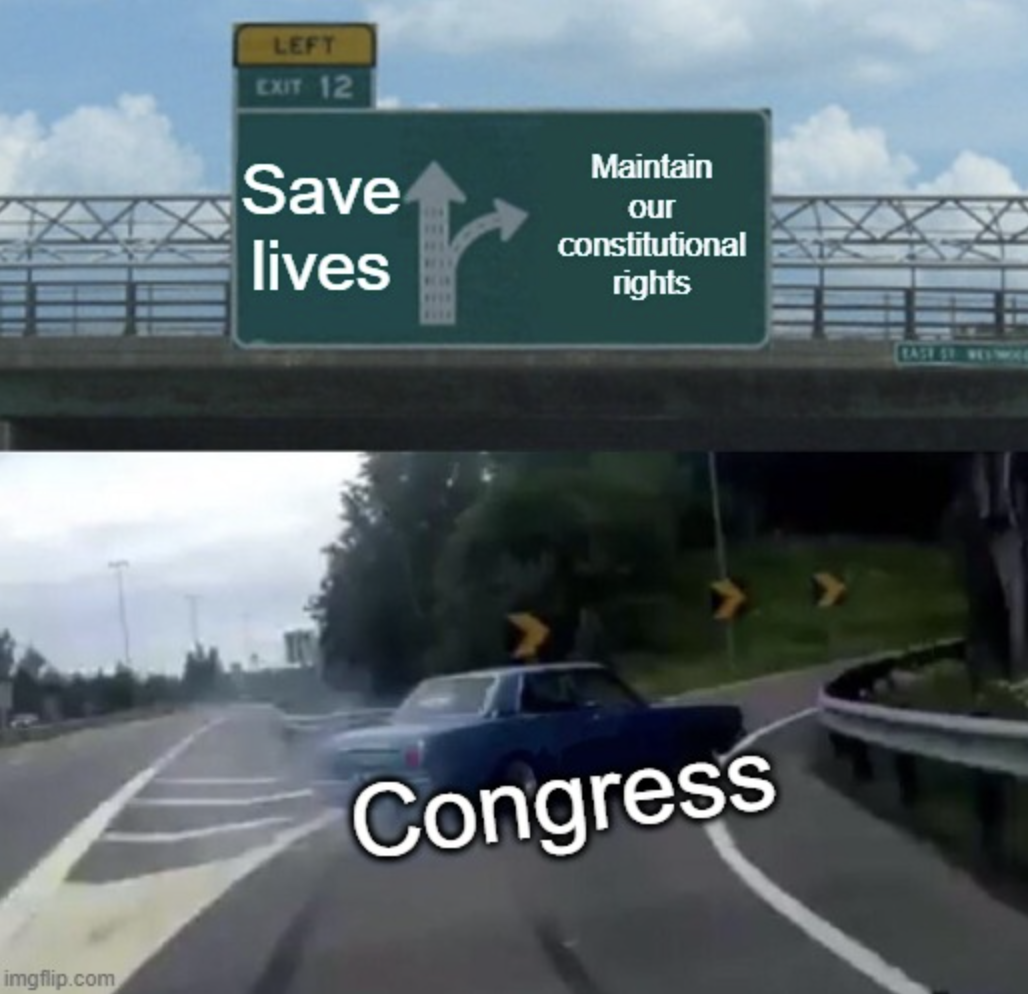 A car representing congress swerving onto an exit ramp titled "Maintain our constitutional rights" instead of staying on the highway titled "Save lives." Photo courtesy of imgflip and edit courtesy of the author.

To whom it may concern,

My name is Youssef Souayah, a 16-year-old from Boston. I’m one of the many people who are not directly affected by police violence, but I’m here to represent the people who are directly affected by it. I’m also here to bring attention to the over 8,000 black and Latinx people who have died from this epidemic. People in minority groups should not have to fear for their lives when in the vicinity of police, which is why I propose that the members of the U.S. Congress vote to change police training and restrict police use of guns and for the House of Representatives specifically to pass the George Floyd Justice In Policing Act.

Currently, police officers are making the streets more dangerous for minority people. According to the Black Lives Matter Foundation, the current situation regarding police puts black people at great risk. One in a thousand Black men will die from police violence “and are 2.5 times more likely to be killed by police than white people.” This is even more so if they’re unarmed. The current situation of policing in our country makes it so that minority groups, mainly black people, are in dangerous situations more times in their life than white people.

This can be attributed to how much emphasis there is on using guns in the force. According to The Atlantic, “ ... on average, 71 hours of their training are devoted to firearm skills and 60 hours to self-defense, according to a 2013 Bureau of Justice report, while only 43 hours are spent on community-policing measures, such as cultural-diversity training, human relations, mediation, and conflict management.” This is major because more gun training, relative to community training, would make the officers more likely to shoot first rather than talk. This can help explain the statistics I mentioned earlier. We have seen the disastrous impacts of giving more combat training to police in the past 10 years, especially in 2020 with high-profile killings such as those of George Floyd and Breonna Taylor, but despite that, many state and local leaders are not willing to change this reality.

So what’s the solution? To address this issue, I’d suggest you do the following — decrease the number of hours spent on gun training. While it is fair to say that being an officer is a dangerous job, not all situations officers are put in are dangerous for them. Rather than combat training, officers should take part in community training, such as peaceful resolutions of conflict, and all police officers should be required to receive racial profiling and implicit bias training.

I would like to point out that, although officers are already receiving implicit bias training, it is not enough. Therefore, the time spent on these trainings should also be increased as a result of a decrease in time spent on combat training. New Jersey, for example, makes it mandatory for officers to take implicit bias training every five years. Although far from ideal, this is a step in the right direction. In New York, there was also a boom in implicit bias training, and Joshua Correll, an associate professor of psychology at the University of Colorado Boulder where he studies racial bias, conducted a study at the New York Police Department that allowed researchers to track the effects of mandatory implicit bias training as it was implemented in 2018. The study involved various officers taking part in answering a series of questions regarding what they learned in the training. The difference between pre-and post-training day correct results is substantial. Pre-training results, on average, yielded 45.2% correctness, while post-training results yielded 60.8%, a 15.6% increase.

If you’ve read this far, I’d like to thank you. Thank you for taking the time to read and understand my perspective on this issue and why action is so important. Now more than ever, we need to stand with our black and Latinx people because no one should have to go through the trauma of losing someone to police violence or the fear that they will be eventually affected by police violence. We’ve seen the positive impacts that a change in police training can have from what we’ve seen in New Jersey and New York, and if that change is implemented nationwide, I see it could be successful in saving lives and reducing the size of the racist footprint in our country.