All Muslims are (not) terrorists 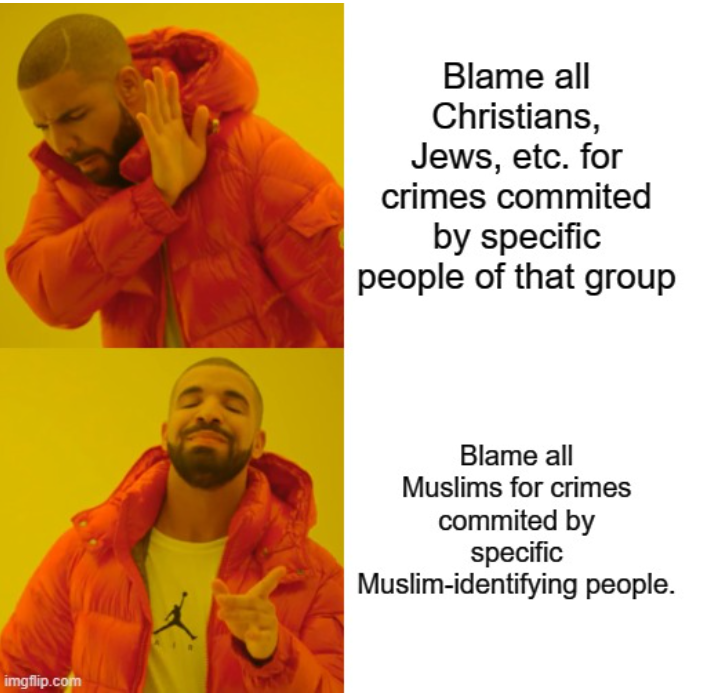 Don’t take the part as equal to the whole. I wish people would apply this logic when it comes to talking about Islamic Extremists and Muslims. The idea that all Muslims are terrorists can’t be farther from the truth.

I find that in light of recent events that have greatly affected the Muslim community, it is important to shed some light on the falsehoods in the ideology of Islamophobia.  Because a large percentage of modern-day terrorism is caused by Islamic Extremists, who claim to be religiously motivated, people think that the religion of Islam instructs on violence. What is really mind-boggling is that there have been various instances throughout history in which a large percentage of a group has committed great atrocities, and yet the entire population isn’t looked at with disdain by society as Muslims are today because of what happened on 9/11. Just like any other religion or race with a few bad apples, only a miniscule amount of Muslims are bad people who commit crimes in the name of Islam when they don’t have a good understanding of it.

I first noticed Islamophobia when I came back to the United States in 2016, during Donald Trump’s presidential run. At the age of 11, seeing his xenophobic, Islamophobic and overall racist rhetoric, mainly talks of the ban on 13 Muslim countries, scared me. I was worried we were going to get deported once he became president and despite me being a citizen.

I would later come to understand a large source of modern Islamophobia in the country: 9/11. And yet it was hard for me to understand why 19 people could affect someone’s view on 1.8 billion people. Over the next few years I learned about various atrocities throughout history, and the ones that I feel are the closest to 9/11 would be the Holocaust and the Iraq War.

The Holocaust, which you probably already know, involved Germany’s Adolf Hitler and his Nazi army who murdered thousands of Jews in chambers. Yet, the Germans today are not seen as entirely bad, only Adolf Hitler and the Nazis are. Similarly, the Israeli-Palestinian war and the many genocides that happened hasn’t given Israelis a bad reputation. Former Prime Minister Benjamin Natenyahu, like 9/11’s Osama Bin Laden, attacked a large center where people were gathered and many were killed.

To be clear, I’m not saying the above parties should be seen with disdain because, after all, they are flawed people. At the same time, Islam should also not be given the dislike it gets and most Muslims should not be seen as evil. As you may have already guessed by now, I am Muslim and although I have thankfully never faced Islamophobia, I have heard enough about it and seen it on the news to say that it is unsubstantiated. Islam in Arabic means “surrender”; its message is to surrender to God and let Him and His words guide you through your life. The word Islam also comes from the word salam which means “peace”; the Islamic book the Quran speaks almost constantly about being peaceful with yourself and with people around you. It greatly denounces violence. For example, it states “Whoever takes a life — unless as a punishment for murder or [committed a crime] — it will be as if they killed all of humanity.”  War is only encouraged in a few verses that were made for the time of its revelation to the Prophet Muhammad across a period of 23 years in the seventh century. Other religious texts too, such as the Bible, have similar verses that encourage violence, but only directed to people of the era of their revelation. One verse from the Old Testament says, “Do not fear or panic or be in dread of them, for the Lord your God is he who goes with you to fight for you against your enemies, to give you the victory.”

Also, despite popular belief that all Muslim families have bombs and other weapons in their homes, I can say from experience that my entire family lives normal lives, have 9-to-5 jobs, and respect all laws. The same thing can be said of 99% of the Muslim population.

Most Muslims, like Christians or Jews, are self-respecting individuals who live peaceful lives and are just human. Also, just like people from different faiths, many Muslims throughout history have done amazing things that benefited the world. One of the most important inventions Muslims created is the mathematical concept of Algebra. It was created by Persian polymath al-Khwarizmi. Other noteworthy inventions are the concept of a clock to tell time; and the astrolabe, which can be thought of as an early prototype of the compass. In modern times, a Sudanese student from Texas, Ahmed Mohamed, brought a homemade digital clock to school in 2015 and was arrested for supposedly bringing a bomb. The incident went viral and Mohamed was praised by then-president Obama and other political characters. Don’t take extremists as equal to all Muslims. Most Muslims are like most others. They are well-meaning people who can provide good to the world. We shouldn't generalize them, or any members of societal groups, based on stereotypes.