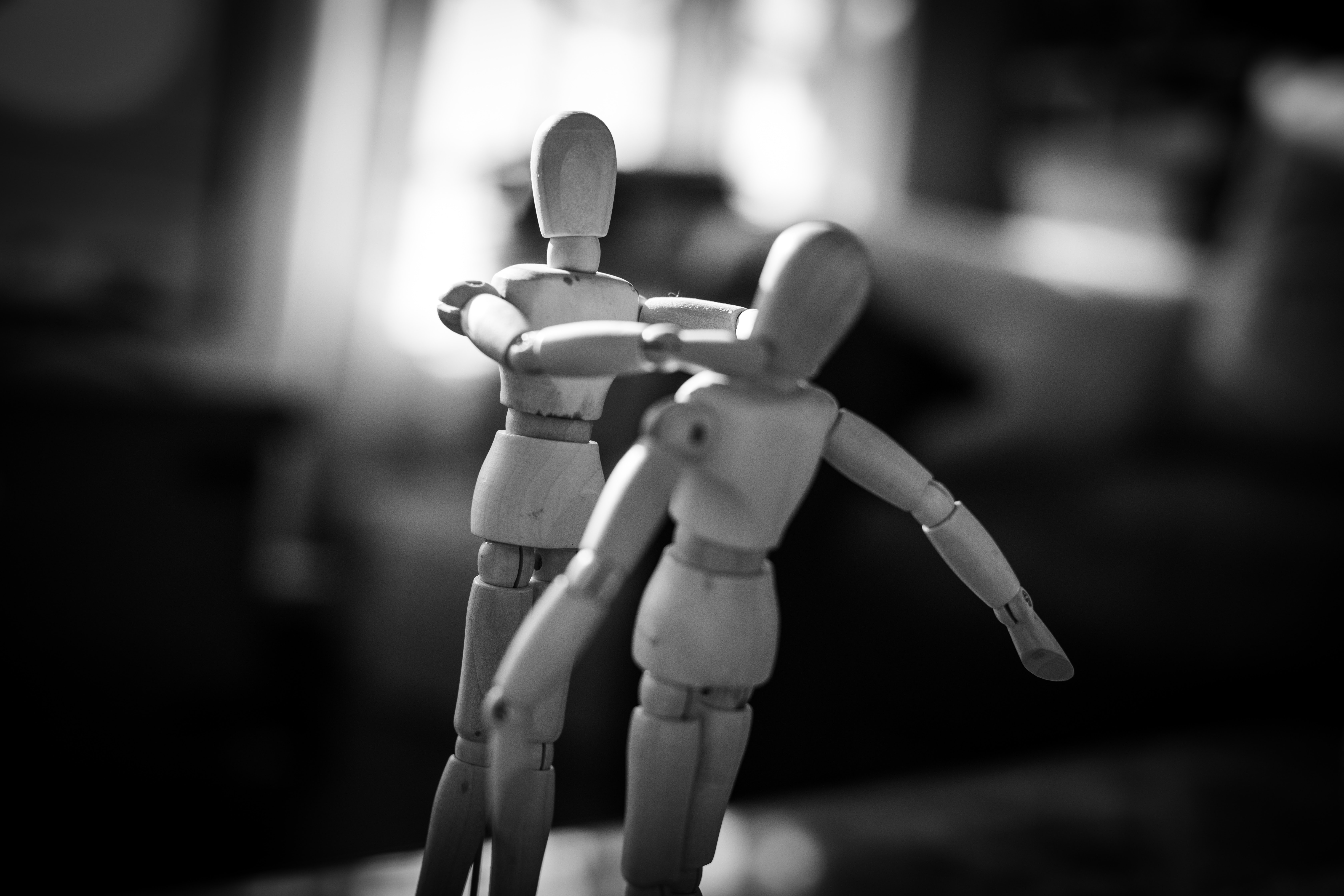 Two wooden mannequins standing in front of each other, the one on the left has its hands on the other's face. Photo courtesy of Charl Folscher on Unsplash.

Before school starts, students are allowed to stay in the cafeteria before being able to walk around the building and it was in the morning that I gave him a black eye. This is the part where I would describe how I felt. However, I have no recollection of this event. I have asked some of my close friends about this and they don’t remember. The only way I knew I had done this was from that friend who I punched but how could I forget something so important? I gave him a black eye, it would have been on my record and most importantly I would remember a punishment. I didn’t remember any of it and in fact, it can’t even be called a fight, rather just assault. It was stupid.

This is what happened to my friend and me two years ago in our Algebra 2 class. To start, this class was a joke. Everyone knew the teacher didn’t want to teach algebra so everyone took advantage of that and slacked off. The room our class was in, was a computer lab in the corner of the building; so not much work was being done, a lot of chatter, a lot of nothing, and very rarely were people doing what they were supposed to be doing. My friend and I took advantage of this every day, just chilling and studying for the next class we had. Sometimes the two of us messed around on the computers, my friend wanted to get into coding so he would use that time to learn Python, while I spent most of my time playing browser games on Cool Math Games or even Poptropica.

There was already some tension going on. To begin with, my friends had some kind of vendetta against him and I am sure he was hearing things about me. It was inevitable that something was going to happen, yet I can’t even tell you what the argument was about because I do not know what we argued about. But the tension cracked like an egg and the result of this situation split the common friend group in half, which is still happening to this day. We asked our Algebra teacher to split our seats one day, it was the one thing we could agree on.

There were only a few times where we argued, whether by text, voice call, or in person, and every time it felt insufferable, frustrating, and annoying. We didn’t let the other one speak and one of us completely trashed the other’s opinion. It was a back and forth mess of what seemed to be ignorance and stubbornness, by two people who were in the wrong that believed they were in the right. No matter what the subject was, one thing was sure, it didn’t matter at all. It was stupid.

Even after we split and cut ties, there was still tension. I remember a lot of the comments I shared with my other friends about him, not out of distaste or spite, but out of pettiness. But I continued to try to look past it and focus on my studies. A change of routine never did happen, our Algebra class was still the same, everyone slacked off, messed around. I did all the homework “assigned” every day because it was a coin flip if the teacher was going to check it or not. I think everyone realized at this point that this class was really stupid, and a lot of us took advantage of it. But despite this lack of change, my pettiness got the best of me and I gave him a black eye.

So is that it? A story with a pointless argument with no real conclusion? I have no recollection of what happened after that. At some point, I thought to myself “What are we arguing about?” To this day I still think to myself if what we were arguing about was even relevant and it makes me laugh thinking about it. This stupid argument that was created by who knows what, never really had a conclusion, it only led to terrible decisions and I think I started to unconsciously start taking steps back for future arguments.

How do you respond to someone that has a different opinion from you? How do you react when a person disagrees with you? Do you actually have a legitimate argument or are you rambling on with no purpose? Why are you arguing and what will come if you win the argument? These are the many questions that I asked myself when deciding to argue with someone or not.

Reflections are a sign of maturity, evaluating your rights and wrongs and understanding yourself as a person is a big part of what makes an argument strong. And so, if you can identify a stupid argument, then you can move on to the next thing and avoid it entirely. In my opinion, the simplest way of avoiding controversies like stupid arguments or fights is knowing your own self. Stupid arguments lead to stupid decisions, and at some point, we all know it’s better to not be involved. You’ll forget the point of the argument but be tied to the stupid decision you made.

It’s been so long since that argument that I don’t think I can even regret my decision, because how are you supposed to regret a decision caused by a stupid and forgetful argument? That goes for society too, there’s a lot of stupid things that I believe can be completely avoided and some aren’t as rational as others. I was fortunate that this incident was during high school and forgotten about pretty quickly, yet I can’t help but imagine the consequences if this was later in my life. It was a stupid argument that created a stupid choice.